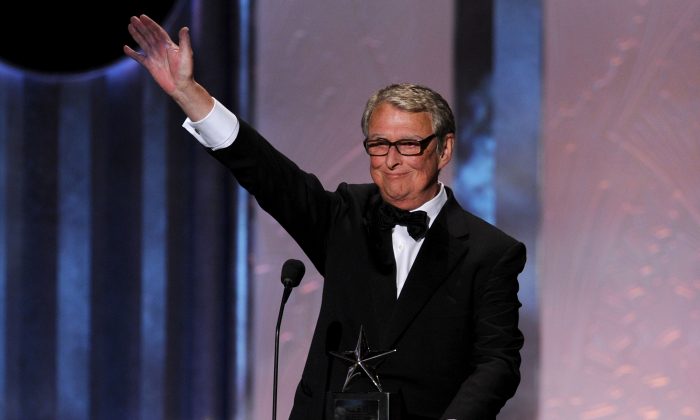 Mike Nichols R.I.P.: Master of All Mediums Dead at 83

NEW YORK—A legend of film, theater and comedy in nearly equal measure, Mike Nichols was an unquestioned fixture of smart, urbane American culture across a relentlessly versatile, six-decade career that on stage or screen, reliably coursed with crackling intelligence.

Nichols won nine Tonys, an Oscar, several Emmys and a Grammy. He made up the lanky half of his groundbreaking comic duo with Elaine May. As a director, he made countless performers — from Dustin Hoffman to Whoopi Goldberg — into stars. To consistent acclaim, he adapted Edward Albee, Neil Simon, Tony Kushner and Arthur Miller.

Nichols, who died Wednesday night in New York at 83, was a supreme orchestrator of material, talent and taste. In films like “The Graduate,” ”Who’s Afraid of Virginia Woolf?” and “Carnal Knowledge,” he left not only a firm stamp of authorship. But with a dry wit and a classical eye, he choreographed caustic social commentaries of couples drunk with bitterness, bored with regret and apprehensive in flight.

“I keep coming back to it, over and over: adultery and cheating,” Nichols, who was divorced three times before marrying ABC News’ Diane Sawyer in 1988, said last year. “It’s the most interesting problem in the theater. How else do you get Oedipus? That’s the first cheating in the theater.”

Meryl Streep, who stared in Nichols’ “Silkwood” and “Heartburn,” recalled him as “a director who cried when he laughed, a friend without whom, well, we can’t imagine our world.”

“For me, ‘The Graduate’ was life altering — both as an experience at the movies as well as a master class about how to stage a scene,” said Spielberg. “Mike had a brilliant cinematic eye and uncanny hearing for keeping scenes ironic and real.”

The Berlin-born Nichols, whose Jewish family emigrated to the U.S. in 1939, lost his hair at age 4 from a reaction to an inoculation for whooping cough, and would wear wigs the rest of his life. He began as a stand-up, and comedy would remain the bedrock to his sensibility and sense of timing.

Nichols and May developed their great improvisational rapport into a saucy, sophisticated stage show that took on sex, marriage, family and other subjects in a frank manner that titillated and startled audiences of the late 1950s and early ’60s.

His 1966 film directing debut, “Who’s Afraid of Virginia Woolf?,” unforgettably captured the vicious yet sparkling and sly dialogue of Albee’s play, as a couple (Richard Burton and Elizabeth Taylor) torment each other over deep-seated guilt and resentment.

“Angels in America,” the 2003 TV miniseries adapted from Kushner’s stage sensation, blended rich pathos and whimsy in its portrait of people coping with AIDS and looking to the heavens for compassion they found lacking in Ronald Reagan’s 1980s America. Similarly, Nichols’ 2001 TV adaptation of the play “Wit” packed biting levity within the stark story of a college professor dying of ovarian cancer.

“I have never understood people dividing things into dramas and comedies,” said Nichols, who won directing Emmys for both “Angels” and “Wit.” ”There are more laughs in ‘Hamlet’ than many Broadway comedies.”

He was a wealthy, educated man who often mocked those just like him, never more memorably than in “The Graduate,” which shot Hoffman to fame in the 1967 story of an earnest young man rebelling against his elders’ expectations. Mixing farce and Oedipal drama, Nichols managed to capture a generation’s discontent without ever mentioning Vietnam, civil rights or any other issues of the time. But young people laughed hard when a family friend advised Benjamin that the road to success was paved with “plastics.”

Nichols won the best-director Oscar for “The Graduate,” which co-starred Anne Bancroft as an aging temptress pursuing Hoffman. The film was radical for both its casting (Hoffman, then a little-known character actor, was far from the traditional leading man) and its hugely influential Simon and Garfunkel soundtrack.

Not just actors, but great actors, clamored to work with Nichols, who studied acting with Lee Strasberg and had an empathy that helped bring out the best from the talent he put in front of the camera.

Just as he moved easily among stage, screen and television, Nichols fearlessly switched from genre to genre. Onstage, he tackled comedy (“The Odd Couple”), classics (“Uncle Vanya”) and musicals (“The Apple Tree,” ”Spamalot,” the latter winning him his sixth Tony for directing).

“I think a director can make a play happen before your eyes so that you are part of it and it is part of you,” he said. “If you can get it right, there’s no mystery. It’s not about mystery. It’s not even mysterious. It’s about our lives.”

Nichols’ golden touch failed him on occasion with such duds as the anti-war satire “Catch-22,” with Alan Arkin in an adaptation of Joseph Heller’s best-seller and “What Planet Are You From?”, an unusually tame comedy for Nichols that starred Garry Shandling and Annette Bening. He also didn’t make a movie between 1975 and 1983, and in the ’80s, he later told The New Yorker, suffered from an addiction to the sleeping drug Halcion.

Born Michael Igor Peschkowsky on Nov. 6, 1931, Nichols fled Nazi Germany for America at age 7 with his family. He said he fell in love with the power of the stage at age 15 when the mother of his then-girlfriend gave them theater tickets to the second night of the debut of “A Streetcar Named Desire” starring Marlon Brando in 1947. “We were poleaxed, stunned,” he recalled.

Nichols attended the University of Chicago but left to study acting in New York. He returned to Chicago, where he began working with May in the Compass Players, a comedy troupe that later became the Second City. The two became a sensation, culminating in their Broadway show, “An Evening With Mike Nichols and Elaine May,” which won a Grammy for best comedy recording in 1961.

The two split up soon after, though they reunited in the 1990s, with May writing screenplays for Nichols’ “Primary Colors” and “The Birdcage,” adapted from the French farce “La Cage aux Folles.”

After the break with May, Nichols found his true calling as a director, his early stage work highlighted by “Barefoot in the Park,” ”The Odd Couple,” ”Plaza Suite” and “The Prisoner of Second Avenue,” each of which earned him Tonys.

Other honors included Oscar nominations for directing “Who’s Afraid of Virginia Woolf?”, “Silkwood” and “Working Girl,” a best-picture nomination for producing “The Remains of the Day,” and a lifetime-achievement award from the Directors Guild of America in 2004.

Nichols was first married to Chicago TV personality Patricia Scott. He and his second wife, Margo Callas, had a daughter, Daisy. With his third wife, novelist Annabel Davis-Goff, he had two children, Max and Jenny. He’s survived by his wife Sawyer, his three children and four grandchildren.

At an AFI lifetime tribute to Nichols, his old comedy partner May told writers: “You really want Mike to direct your screenplay because you know that every shot and every costume and every piece of furniture and every shoe is going to tell your story, and never give it away.”