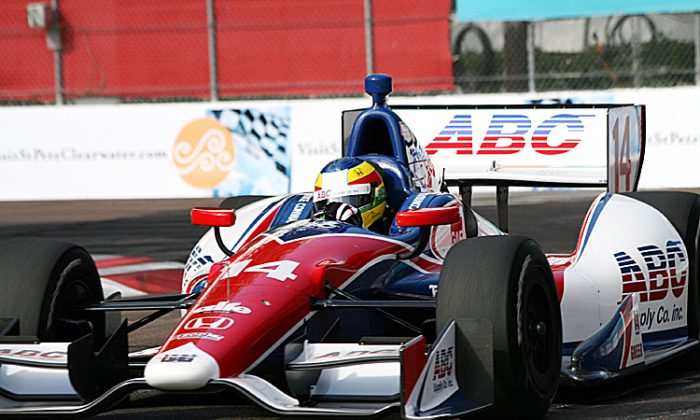 ST. PETERSBURG, Fla.—Mike Conway was one of the drivers who felt he hadn’t gotten the most out of his car in qualifying for the IndyCar St. Petersburg Grand Prix Saturday. He proved that by being quickest in final practice Sunday morning.

Conway, driving a Honda-powered Dallara for ABC Supply/A.J. Foyt Racing, led Takuma Sato and Justin Wilson in the morning session, when most cars were taking it easy on the damp track and half the session was run on rain tires.

None of the top qualifiers were pushing hard—Ryan Hunter-Reay, who qualified fourth, was fifth in practice—but Conway’s practice pace could translate into a much quicker race pace, far better than his 12th-place qualifying effort might predict.

Conditions for the race will be near-ideal: sunny with the temperature in the low 80s, scattered clouds and a light breeze. Early-morning rainstorms blew through the area but the bulk were south of St. Pete; the race won’t see another rainout and postponement as in 2010.

Race organizers are expecting a crowd of over 150,000 people for the day’s events, which include races by USF 2000, Pirelli World Challenge, Star Mazda and Ferrari Challenge as well as the IndyCar main event.

The IndyCar Honda Grand Prix of St. Petersburg starts at 12:30 ET. Tickets are still available at the box office of online at http://www.gpstpete.com.