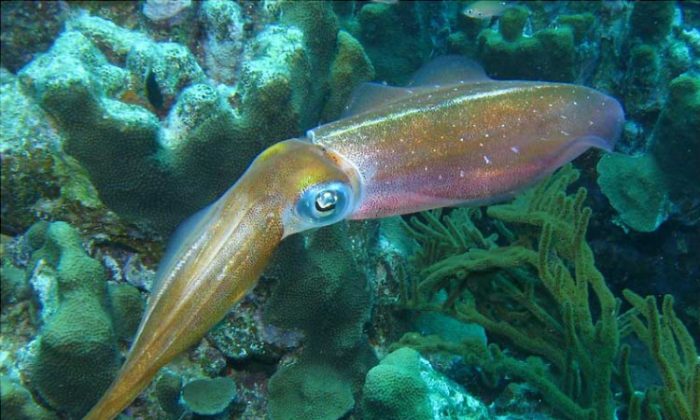 Certain species of squid could choose to fly instead of swim to travel energy-efficiently while migrating, according to new research presented at the American Geophysical Union’s Ocean Sciences Meeting on Feb. 20.

Squid use jet propulsion to travel through water by expelling bursts of water from their mantle. Some species use this same method to “fly” through the air, which most scientists previously thought was a behavior used to escape predators.

A team of U.S. researchers analyzed high-speed photos of the orange-back squid, Sthenoteuthis pteropus, shooting through the air off Brazil. They calculated that the airspeed of these squid was five times faster than comparable measurements of squid moving through water.

“The question this raised in my mind was, ‘Maybe they really are flying?'” said marine biologist Ronald O’Dor at Dalhousie University, according to Nature News.

“I could never explain how they could get this much energy,” he added. “As soon as we thought about the possibility that these things flew, it became plausible that these animals actually use flight as a way of reducing energy cost.”

Richard Young, retired oceanographer at the University of Hawaii, remains skeptical due to the lack of evidence that the squid fly regularly, but told Nature News that he is excited by the surprising research.

“It’s the first time we’ve ever had any information comparing flight in air with flight in water,” he said.

O’Dor believes this phenomenon occurs more frequently than realized, and wants to investigate it further by tagging the flying squid.