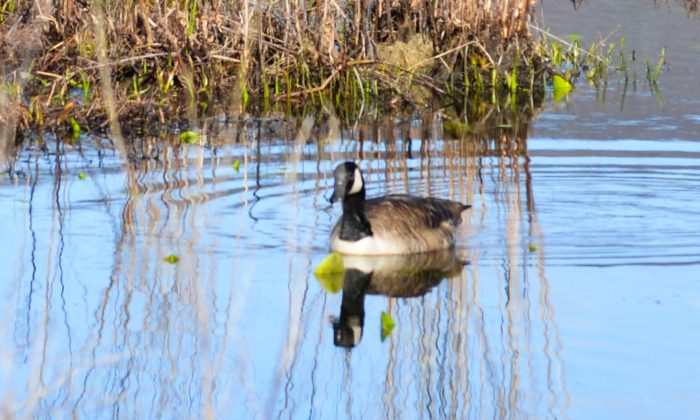 Migrating Birds Stop at the Bashakill

WURTSBORO—Local bird watching expert John Haas led a group of about 35 birders within the Bashakill Wildlife Reserve on March 26 to enjoy the waterfowl and spring migrants. Haas said in his blog Bashakill Birder that the groups had a chance to see mallards, black ducks, wood ducks, green-winged teal, killdeer, and Wilson’s snipe.

Three friends, Sharon Bobbins, Michelle Cohen, and Sandy Heck, came to enjoy the bright sunshine. “I’m here because it’s a beautiful morning in the Bashakill and I wanted to enjoy it and learn a little bit more about the birds of the area,” Bobbins said.

Haas recommended amateur birders check out inlets and estuaries to find the birds. Some of the first waterfowl sighted were green-winged teal far off in an inlet. Haas counted 62 sighted at the end of the morning.

Swallows flew along Haven Road near the bridge. “Looking out over the kill in both directions swarms of swallows were feeding. At least fifty Tree Swallows were also perched on the wires. I was sure there would be a Barn Swallow among them, but no luck. Just when I thought there were just the Trees, two Northern Rough-Winged Swallows flew right past the bridge!” Haas wrote in his blog for the day.

Cohen hoped to see an eagle and the group was rewarded with the sighting of one of the two male Bald eagles that live in the Bashakill. “He comes every day and sits in that tree,” Haas said, pointing to a tall pine.

Haas had a high-powered field glass on a stand for the group to see through. The Bashakill is home to two eagle pairs. They are territorial and generally stay on their side of the reserve. He said “they get along fairly well, considering, but have their own ends of the Bashakill.”

Haas described how one pair took about three years to make a family. The first year they built a nest “that ended up falling apart. They didn’t know what they were doing. They were young and all that sort of stuff.”

The second year they laid eggs but a storm took the tree down just as the eggs were about hatch. Haas said the eagles successfully hatched two young and successfully raised them last year.

Many immature eagles, on some days as many as 20, will fly along the channel, before they find a mate and take a territory. Because of the mild winter, many have moved north.

Along the channel, several muskrat lodges and a beaver lodge were spotted. Haas said you can tell the difference because the beaver builds a larger structure and uses tree limbs and brush while muskrats build only with plants. “Beavers do sticks, the muskrats only do vegetation.”

At the main boat launch, the group had a good sighting of the bald eagle’s nest. Three blue-winged teal “showed beautifully in the early morning light,” he wrote in his blog. The area around the launch had bufflehead, pied-billed grebe and ring-necked ducks moving around.

Haas is a wealth of information of bird movements. He told the group about a major winter storm in the Midwest that pushed thousands of birds into the area with 50-mile winds. “In fact there are still three lark sparrows in New York right now that are normally western birds. That storm brought them all in.

When these birds start migrating and they get up there and then they get caught on these air currents it just takes them.
— John Haas, birding expert, on bird movements after a major storm

“When these birds start migrating and they get up there and then they get caught on these air currents it just takes them. In a couple of days period literally hundreds of south central birds ended up in New York and New England,” he said.

Haas has been birding for 24 years and is a member of the Bashakill Association. His eye catches everything in flight but another sense really helps him identify various species of birds, as he identified Killdeer flying overhead. “How do you identify them without binoculars?” someone in the group asked him.

Haas said “90 percent of my birding is by ear. If I can hear it, I can find it.” He pointed to a pair of snipe quietly swimming nearby that make very little sound. “You’ve got to walk right up on them,” he said.

At the end of morning walk, the bird enthusiasts spotted 38 species. “Always, if you come, look in little back bays and estuaries like that, like all those teal are back there this morning.”

The Bashakill is a prime spot for bird watching on the east coast, especially as birds undertake their spring migration. “A lot of the birds just follow the freeze. They are moving early. This has all the habitat and food sources for all these migrating birds who stop over on their way north,” Haas said.