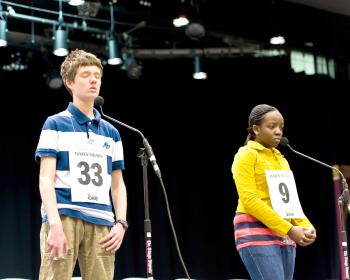 Finalists Thomas Dumbach (number 33) from Hunter College H.S. and Saidah Belo-Osagie (number 9, from The Spence School) concentrating in the 46th annual Daily News New York Spelling Bee on Thursday. Mr. Dumbach won the Thursday competition. Another round of finalists from New York public and private schools will compete on Friday. Thomas Dumbach and the winner of Friday's bee will both travel to Washington D.C. at the end of May to compete in the Scripps National Spelling Bee. (Aloysio Santos/The Epoch Times)
US

Joan Delaney
Senior Editor, Canadian Edition
Joan Delaney is Senior Editor of the Canadian edition of The Epoch Times based in Toronto. She has been with The Epoch Times in various roles since 2004.
View profile
Follow
biggersmaller
Print
A tiny pest that has migrated north from Nebraska and Colorado is making inroads into Canada and feasting on corn in the provinces of Ontario and Quebec.

The western bean cutworm first arrived in Canada in 2008 and since then has proliferated, with significant trap catches this summer in Ontario.

“Last year our highest final count was close to 2,000 moths and we reached that just within a few weeks of trapping them this year. One county in particular has caught 26,000 or more moths now so far—so there’s a lot more out there.”

The numbers are higher in southern Ontario counties that border Michigan, says Baute.

Easily identifiable with a white spot and boomerang shape on its white-edged wings, the moth began spreading north and east from Nebraska in 2000. It showed up in Ohio and Michigan a few years ago, with significant crop damage occurring in Michigan last fall.

The young larvae feed on the corn tassels and silks and when big enough, tunnel into the kernels. This not only causes fungus growth, but allows other pests to get into the kernel as well. However, while most cutworms sever the plant at the ground, the western bean stops short of that.

Besides corn, the cutworm likes dry beans such as kidney and pinto, which means some of the work done to control the pest in Nebraska and Colorado—where it only had corn to survive on—doesn’t apply in Canada, Baute says.

“Once it hit Michigan and Ontario it also has its second primary host, which is dry beans. So between those two there’s a lot of dynamics going on," she continued.

“So we’re scurrying trying to get as much information and as much research done so that we have more answers for the growers as quickly as possible.”

While entomologists don’t know why the bug began migrating, Baute says that once it reached the Great Lakes area, an abundance of no-till acreage in Ontario would have allowed it to escape being killed during ploughing.

“Also, we have sandy soil that they really prefer so they can get deeper into the ground to over-winter,” she adds.

Pesticides are the best line of attack against the cutworm, and the most opportune time to spray is directly after the eggs hatch. Once the pest gets into the ear of corn, however, control is next to impossible, Baute says.

Because it’s a new pest, not a lot of natural enemies or biological controls have come into play yet, she explains, but over time that may change.

“We may see something in the future—more ladybugs might feed on the eggs or an actual pathogen might kill them off, but it does take a few years for those to kind of respond and actually have an impact.”