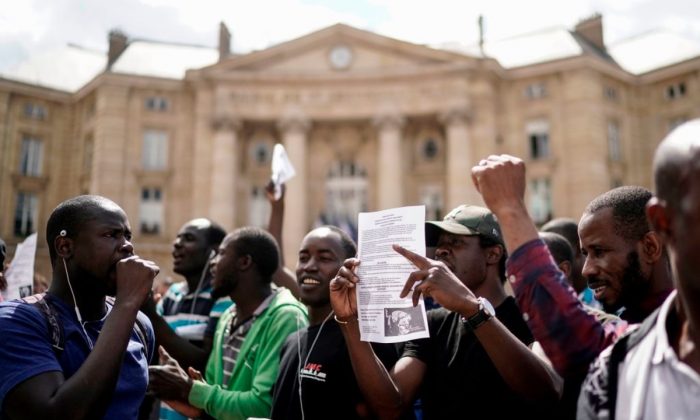 Illegal migrants demonstrate in front of the Pantheon in Paris to ask the French government to give them residency papers on July 12, 2019. (Kenzo TRIBOUILLARD / AFP)
Europe

Hundreds of illegal immigrants stormed the Pantheon in Paris demanding residency papers and free housing from the French government on July 12.

The protesters, mostly from West Africa, entered the Pantheon where many of France’s distinguished are buried and demanded to talk to Prime Minister Édouard Philippe, reported the BBC.

The protesters, who called themselves “Black Vests,” chanted slogans, and waved papers and a long red banner, as seen in a two and a half-hour long video shared by the group on social media.

The video titled “Papers and Freedom for all!” was streamed live by protesters on Facebook.

In the Facebook post, protesters described the numbers within the Pantheon to be 600, whereas the BBC reported between 200 to 300 protesting migrants. It said that 37 had since been arrested.

Prime Minister Philippe said in a message on Twitter that France is a state of law and that all protesters were evacuated from the Pantheon.

“All those who entered the # Pantheon were evacuated. France is a state of law, in all that implies: respect for the rules that apply to the right to stay, respect for public monuments and the memory they represent,” read a translation of Philippe’s message.

“It is INADMISSIBLE to see clandestine claimants occupy, with complete impunity, this high place of the Republic which is the Pantheon. In France, the only future of a clandestine should be expulsion, because it is the LAW,” she said, according to a translation of her message posted in French.

Prominent French nationals buried at the Pantheon include Émile Zola, Victor Hugo, and Alexandre Dumas, and scientist Marie Curie, according to BBC.

The AFP reported that later on, a small group gathered outside where the arrested migrants were detained showing placards that read “free the gilets noirs (black vests)” and “police are racists.”

The “Black Vests” have become known for staging headline-grabbing protests. In May, they had staged a similar protest at the Paris Charles de Gaulle airport in which they demanded to speak to the Prime Minister, according to a report by Breitbart.

“France does not belong to the French! Everyone has a right to be here!” a protester said through a loudspeaker.

The “Black Vests” derived their name from the “Yellow Vests” movement. That movement was sparked in November 2018 when ordinary Parisians took to the streets in bright yellow vests to protest the Macron government’s rising fuel taxes under its policies said to combat climate change.

In contrast, “Black Vests” are calling for more tax-payer support for illegal immigrants, demanding that Air France “stop any financial, material, logistical, or political participation in deportations,” according to a statement released on Facebook.

According to Breitbart, the “Blacl Vests” see Air France as the “official deporter of the French state.”

The “Black Vests” have also been know to physicallt prevent people from boarding their flights.

France in the past two years has received an unprecedented number of asylum applications, and another report by Breitbart said that the French government has been overwhelmed by it.

The report also said that there are about 400,000 illegal migrants in the Paris suburbs of Seine-Saint-Denis department alone. This would make up to 20 percent of the total population there.