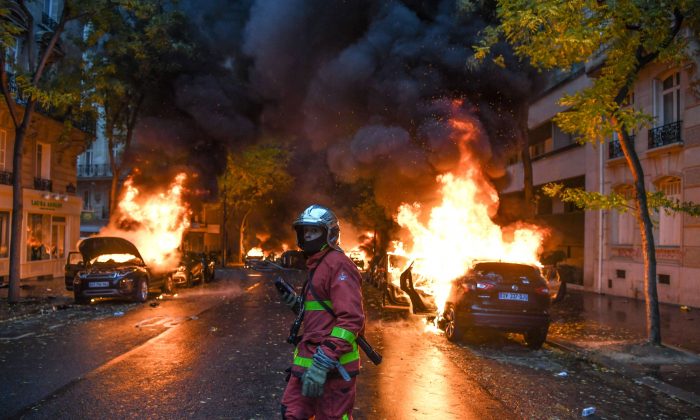 A firefighter looks on as cars are burning during a "yellow vest" protest in Paris, on Dec. 1, 2018. (Alain Jocard/AFP/Getty Images)
Europe

French President Emmanuel Macron has ordered his prime minister to hold talks with political leaders and protesters after riots turned central Paris into a battle zone.

The unrest began as a protest against rising fuel taxes, but has become the biggest challenge Macron has had to face as president, with the depth of anger over his financial reforms catching him off-guard.

On Dec. 1, violent protesters ran amok in Paris’s wealthiest boroughs, smashing luxury homes and looting stores. Police arrested more than 400 people in Paris and fired about 10,000 tear gas canisters into the crowds; 133 people were injured in the riots.

TV footage showed a statue of Marianne, a symbol of the French Republic, that had been smashed.

Macron rushed back from the G-20 summit in Argentina to be met with an Arc de Triomphe graffitied, with slogans such as “Macron resign,” and “The yellow vests will triumph.”

The “yellow vest” rebellion erupted out of nowhere Nov. 17, with protesters blocking roads across France and impeding access to some shopping malls, fuel depots, and airports. It has since been infiltrated by violent groups from the far-left and far-right, according to French authorities.

And while they were initially protesting Macron’s fuel tax increases, which he claims have been imposed to combat climate change, they have also exposed a deep dissatisfaction toward his economic reforms, which many feel favor the wealthy.

Government spokesman Benjamin Griveaux indicated the Macron administration had considered imposing a state of emergency. The president was open to dialogue, he said, but would not reverse policy reforms.

“We won’t change course. We are certain of that,” he told Europe 1 radio.

Griveaux later told France Inter radio that the government needed to find a way to “solve the deeper, structural problems” of the past 30 years.

“It will just start over six months down the line … That wouldn’t be respectful of anyone,” he said.

The unrest hit the French economy, with hotel reservations down, retailers suffering, and some 75 Total filling stations running dry because they couldn’t receive supplies.

The French presidency said in a statement Dec. 2 that Macron has asked security forces to prepare for future protests and that the prime minister should speak with political leaders and representatives of the protesters.

In the streets around the Arc de Triomphe, some Parisians worried the violence could be repeated for a third weekend.

“The violence is increasing at an exponential rate,” said Claude, a resident in the affluent 16th district. “The state is losing control, it is scary. They cannot let this happen. Maybe the army should intervene.”

Opposition leader Laurent Wauquiez, of the center-right “Les Republicains,” said the government had failed to understand the depth of public anger.

“What we need are gestures that appease and these must be born out of the one decision every Frenchman is waiting for: scrapping [fuel] tax hikes,” Wauquiez told reporters.

Despite the damage inflicted by the protests, public support for the “yellow vests” remains high, with seven out of 10 people backing them, according to an opinion poll conducted after the violence of Dec. 1.

Macon’s popularity, meanwhile, has been on the slide for a long while before the protests started.

Gael Sliman, president of the Odoxa polling institute, said Macron will lose whether he capitulates to the protesters, or takes a more heavy-handed approach.

“In the second scenario, Macron will still come out the loser, because what everyone will remember is that he wrestled with the popular classes,” Sliman said. “He would be victorious, but at the cost of having crushed them.”