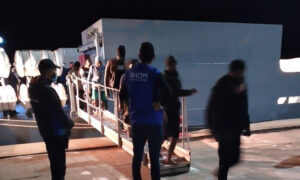 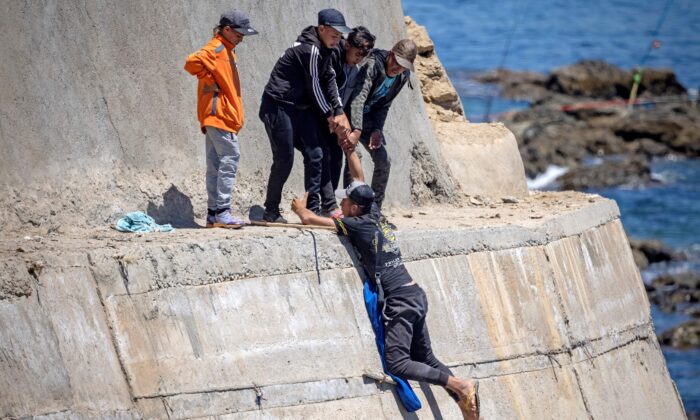 Migrants climb a sea wall in the northern town of Fnideq after attempting to cross the border from Morocco to Spain's North African enclave of Ceuta on May 19, 2021. (Fadel Senna/AFP via Getty Images)
Americas

CEUTA, Spain/FNIDEQ, Morocco—Hundreds of migrants tried to force their way past tightened security into Ceuta on May 19, as Spain pressed on with the expulsion of thousands who had swum or climbed into its North African enclave over the past two days.

Around two-thirds of the roughly 8,000 migrants who made it to Ceuta, including unaccompanied children, have been expelled, Spanish authorities say, though many of those returned said they would again try to reach Europe.

As thousands gathered in the Moroccan border town of Fnideq, near the frontier with Ceuta, hundreds of them clashed after dark with Moroccan riot police, throwing stones and setting on fire a motorbike and a trash bin, a Reuters witness said.

The rush of migrants began on May 17 when Morocco appeared to loosen border controls, a move widely interpreted as retaliation for Spain’s hosting of a Western Sahara independence leader.

As dense afternoon fog descended on May 19, hundreds of young men tried to approach the six-meter-high (20-foot-high) border fence before being repelled by Moroccan police, who later urged the crowd to disperse.

Others had entered the water and begun swimming toward Ceuta’s beach a few hundred meters (yards) away. Spanish television showed the army meeting boys as they reached the shore. Some 1,500 underage migrants are now in reception centers in Ceuta from this and previous waves, Spain said.

On the northern tip of Morocco across from Gibraltar and with a population of 80,000, the enclave has periodically been a magnet for refugees seeking a quick way into Europe. But Rabat has cracked down on border traffic in recent years.

‘Juice and a Cake’

“I am not losing hope. I have friends in Ceuta where I can stay till I get a chance to cross to Spain,” Souhail Abbadi, a man in his 20s from Tangier in northwest Morocco, told Reuters.

Earlier, Spanish police and soldiers escorted long lines of Moroccans and other mainly sub-Saharan Africans through a gate back into Morocco.

“We were given juice and a cake, that is all,” said Mohamed, from Ait Melloul in southwest Morocco, after Spanish soldiers sent him back as soon as he arrived.

He and many other returnees gathered in Fnideq, where they said they were receiving no aid.

Rights group Amnesty International said Spanish security forces had used violence, including beating migrants or throwing them into the sea. It also accused Morocco of using migrants as pawns in its dispute with Spain.

Migrants interviewed by Reuters said they had been beaten by Spanish security forces before being sent back to Morocco. A Reuters journalist watching the arrivals in Ceuta on May 19 didn’t see any beatings or people being thrown into the sea.

Many of the migrants still in Ceuta were children, some as young as seven and some without families, said Spain’s Social Rights Minister Ione Belarre.

“Many of them did not know the consequences of crossing the border. And many of them want to go back,” she told broadcaster TVE.

Reuters TV footage showed hundreds of teenagers being processed at a warehouse where Red Cross officials gave out food and drink.

‘What Did Spain Expect?’

“What did Spain expect from Morocco, which sees its neighbor hosting the head of a group that took up arms against the kingdom?” he wrote in a Facebook post.

Madrid said it had made a humanitarian decision to allow in Ghali, whose movement seeks independence for Moroccan-run Western Sahara.

In a further twist, Spain’s high court summoned Ghali to appear on June 1 for a preliminary hearing in a war crimes case against him, but he declined to sign the papers, a court document that was seen by Reuters on May 19 showed.

A source close to the investigation said he might seek diplomatic immunity under an Algerian passport.