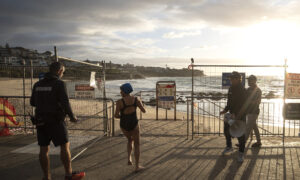 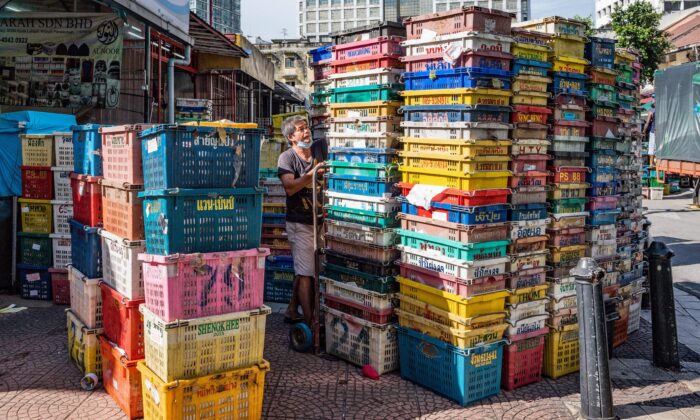 As Malaysia eases its lockdown measures related to the CCP virus, a worker wearing a mask arranges empty crates at a fruit market in Kuala Lumpur on May 4, 2020. (Mohd Rasfan/ AFP via Getty Images)
WORLD

KUALA LUMPUR—Migrant workers in Malaysia are now required to be tested for the CCP virus, a senior minister said, as the government eased six-week long curbs on movement and businesses.

Thousands of Malaysians joined rush hour morning on May 4 as businesses resumed for the first time since the imposition on March 18 of restrictions to contain the spread of the CCP (Chinese Communist Party) virus, commonly known as the novel coronavirus.

Senior Security Minister Ismail Sabri Yaakob told reporters that foreign workers in all sectors must now undergo mandatory screening for COVID-19, the respiratory illness caused by the CCP virus, after an outbreak was reported among migrants working at a Kuala Lumpur construction site last week.

“The costs for testing must be borne by the employer,” Ismail Sabri said.

The announcement comes after Malaysia detained hundreds of undocumented migrants over the weekend, sparking criticism from the United Nations and rights groups. Ismail Sabri had earlier defended the arrests, saying that all of those detained had tested negative for the CCP virus.

Migrant workers have been a particularly vulnerable community during the pandemic. In neighboring Singapore, thousands of infections have been linked to migrant worker dormitories.

There are about 2 million registered foreign workers in Malaysia but authorities say many more are living there without proper documents. The migrant workers are mostly from Indonesia, Bangladesh, India, and Nepal.

Malaysia, which until mid-April had the highest number of infections in Southeast Asia, has defended its decision to relax curbs despite a recent climb in cases. On May 3, it reported 122 new cases, the highest since April 14, for a total of nearly 6,300 infections.

Nine of its 13 states have expressed reservations over the easing move, opting to delay it or toughen restrictions for fear of a surge in infections.

The largest palm-producing state of Sabah, on Borneo island, said it would stick to a previous shutdown order that runs until May 12, to ensure people “are not exposed” to the CCP virus, Chief Minister Shafie Apdal said in a May 3 statement.

But manufacturers are keen to get back to work, with some, such as tech firm Qdos Group, aiming to ramp up production.

Chief Executive Jeffrey Hwang said his company was focused on clearing a backlog in demand for its products, used to make medical equipment, while maintaining “absolute safety” at its facility.

“Got to turn on more overtime in May and June to cope with that,” Hwang added.

The government has estimated losses of 63 billion ringgit ($14.58 billion) and for the economy to turn in its worst performance in more than a decade due to the curbs.