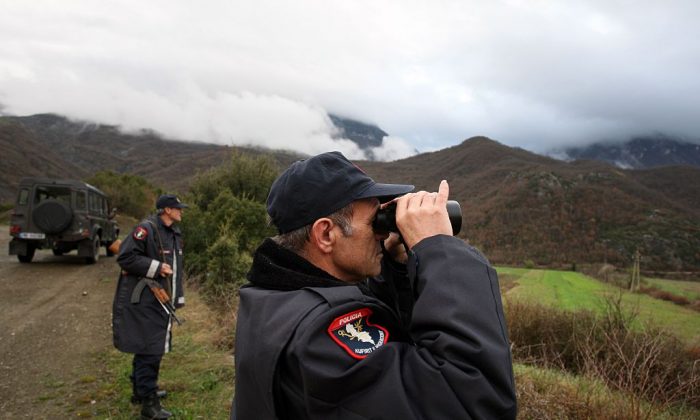 Albanian police officers patrol at the Albanian-Greek border in Carshove near the city of Permet on March 15, 2016. (Gent Shkulluka/AFP/Getty Images)
Europe

TIRANA—Numbers of migrants trying to reach Western Europe via Albania have leapt this year, with people smugglers opening a new Balkan route for those fleeing conflict or poverty in the Middle East, North Africa and Asia.

Migrants gathered outside the Asylum Seekers Centre in Tirana told Reuters how they wanted to find work in a variety of European Union countries, dodging police on the way there.

The flow of migrants heading for EU member Croatia across Albania and its northern neighbor Montenegro remains modest compared with the hundreds of thousands who took a route further to the east when the European migration crisis peaked in 2015.

But the rate of increase this year is rapid. Officials say Albanian authorities caught 2,311 migrants in the first five months, up from just 162 in January-May 2017 and more than double the figure of about 1,000 for the whole of last year.

During the 2015 crisis, migrants tried to travel from Greece through Macedonia and Serbia to EU member Hungary, until this route was sealed by border guards and fences.

With warmer weather encouraging travel from the overcrowded Greek camps, the government feels it has controlled the flow so far. However, impoverished Albania appealed last month to Austria—where the newly-minted government is cracking down on migration—for help.

Security and police officials from the region met in Bosnia this week to discuss their response to growing traffic along the new route. More than 5,500 refugees and migrants have entered Bosnia this year.

Albanian police said they have arrested a handful of people smugglers this year ferrying migrants in taxis or vans. This included two Algerians near the Montenegrin border this week.

The government wants aid to increase patrols on the Greek border and has welcomed a decision by the European border agency Frontex to send officers to fight crime and curb migration.

While the route is new, the migrants’ experiences are familiar. Syrian Faisal Grdawe, from Homs city, said he had not seen his family for a year and reached Greece from Turkey, hoping to travel on to Malta or Italy.

“We have friends and family there and they said it is good. So we want to go to Malta,” Grdawe, 18, told Reuters.

Grdawe and three friends had been part of a group of 30 that left Syria. One of his friends, who gave his name as Mahir, said their stay in the asylum seekers’ center was not the freedom they sought, adding that the “food here is worse than in a jail in Syria”.

Moroccan, Algerian and Pakistani migrants said they followed advice from friends who had crossed earlier: “Go to Italy because you get ID papers there” and “Be careful of Croatian police, they beat you up badly”.

Croatian police say they are acting within the law, and protecting the borders. Interior minister Davor Boznovic said more than 144 people have been detained for people smuggling this year.

The route north is difficult. “I have come from Turkey, then from Greece and tried to go to Montenegro. Police caught me twice,” Hichem Boussadia, 29, told Reuters at the Border Police Station in Shkoder near the Montenegrin frontier.

Austrian Chancellor Sebastian Kurz and Albanian Prime Minister Edi Rama agreed at the end of May that they should “deal with the problem now before it grew bigger like it did in 2015 and 2017”, with Kurz offering financial aid for Tirana.