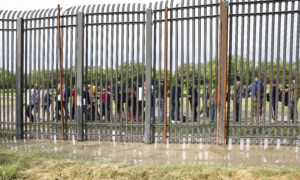 Migrant Caravans Part of Larger Plan to Damage US

The caravan of migrants that originated from Honduras is still en route to the United States’ southern border, with a second column now underway, and information that there’s a third one in its early stages.

Recently, Vice President Mike Pence said that Honduran President Juan Orlando Hernandez told him the caravan “was organized by leftist groups in Honduras financed by Venezuela and sent north to challenge our sovereignty and challenge our border.”

In the days following that revelation, additional supporting details and evidence were reported by the left-leaning Wall Street Journal, the conservative Heritage Foundation, and others that confirm Venezuela’s involvement. Venezuela has a long and well-documented history of antagonism towards the United States, and has declared itself a member of an “axis of unity,” working with Iran, Cuba, and others, against “U.S. imperialism.”

In fact, Iranian intelligence and military officers are embedded in Venezuela’s equivalent organizations, and not just in low-level support positions, but also in higher-level positions of authority. The same and more can be said about the highly professional intelligence agency of Cuba, which has long been a thorn in the side of the United States.

Death by a Thousand Cuts

Venezuela, in conjunction with its friends and supporters, has implemented a strategy of asymmetrical warfare in an attempt to attack the United States, since they lack the military capability to inflict a direct defeat.

Asymmetrical warfare is the new modern term, with a mildly convoluted definition, for an ancient concept made well-known by the Chinese. It’s remembered from history as “death by a thousand cuts;” that is, inflict damage whenever and however you can to weaken your enemy, to the point where they can ultimately be defeated.

These columns of illegal migrants are purposely designed and implemented to inflict damage to the United States and undermine U.S. sovereignty, while avoiding direct conflict. They were likely conceived and financed by Iran, then implemented by Venezuela working closely with the Cubans and Nicaraguans to sow political division and chaos in the United States and absorb resources at little expense to them.

To make this work, there is close cooperation and coordination with transnational criminal organizations, such as narco-traffickers and gangs, which are active particularly throughout Mexico and who are very strong near Mexico’s shared border with the United States.

Less well-known and understood is the Bolivarian Alliance, better known by its acronym from Spanish as Alianza Bolivariana or ALBA.

ALBA was founded by Venezuela and Cuba in 2004 and is an association of leftist governments in Latin America and the Caribbean that also cooperate on economic and propaganda efforts with like-minded governments in the region. They are supported by Iran, China, and Russia, who all share the United States as their common foe. ALBA operates extensively and almost entirely unopposed, and its underlying strategy remains constant, which is to damage and ultimately destroy the United States using asymmetrical warfare.

As a retired CIA career intelligence operations officer, I can assure everyone that the intelligence services of Iran, Russia, China, Cuba, and Venezuela, as well as the trained intelligence personnel from all terrorist groups and any others who have access, consider this migrant column an irresistible opportunity to infiltrate people into the United States. I certainly would, if in their position.

The Guatemalan president reported that about 100 people arrested recently have links to terrorism, including the ISIS terrorist group. Former CIA Director and current Secretary of State Mike Pompeo has warned publicly just how dangerous Venezuela is and that the threat needs to be taken seriously.

As a professional in the intelligence world, I understand that the United States has enemies. I understand that cooperation exists between terrorist groups, transnational criminal groups, and hostile foreign governments. It is the way of things.

However, we find ourselves in the predicament where the liberal Democratic Party leadership and the liberal mainstream media seemingly operate in agreement with the activities of these forces, who intend to damage and ultimately destroy us.

Brad Johnson is a retired CIA operations officer and a former chief of station. He is president of Americans for Intelligence Reform.

Correction: A previous version of this story misstated details on the 100 terrorist arrests mentioned by the Guatemalan president. It’s unclear whether the arrests were related to the migrant caravan.