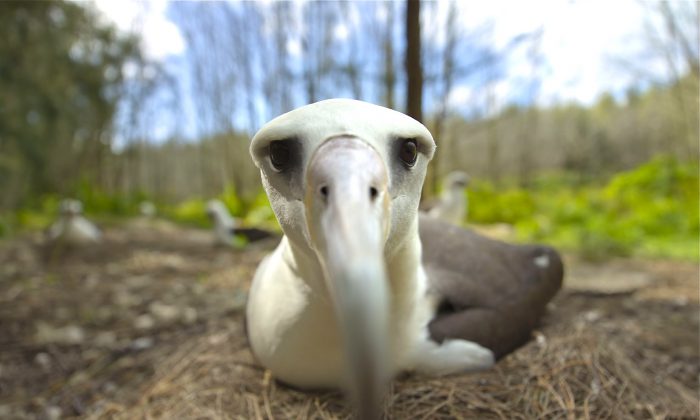 ‘Midway’ Stirs the Heart Before Breaking It

TORONTO—“Midway” is beautiful and heart-breaking.

This poignant tale about the albatross that mate on Midway Atoll is part nature documentary, part tragic love story. Poetically narrated, and beautifully shot, “Midway” reveals the affections of the albatross and the gut-wrenching fate so many will suffer.

“Midway” made its world premiere at TIFF on Sept 6. The film opens with a shot of a single albatross standing like an alien creature on a foreign landscape.

The brilliance of Chris Jordan’s cinematography and the editing of Sabine Emiliani (March of the Penguins) is in how they cast the island as a host and the albatross as its visitor. These birds become characters in a story, rather than documented animals. The resulting tale is potent and captivating.

“Midway” is narrated with the ephemeral, lyrical female voice of the Midway Atoll itself, an otherworldly perspective that gives the filmmaker certain creative licence to comment on the subjects “Midway” touches.

The Midway Atoll is old, we learn, and she has seen many changes. Like the construction of military buildings during WWII, which are now left vacant, maps are still hanging and files are open on desks, as if the inhabitants fled suddenly, or vanished without a trace.

And she appreciates her feathered visitors, these giant sea birds with a wing span that can reach 12 feet. The albatross has a gentle shading around its eyes that gives it a sensitive intelligence. It’s a look proven true throughout the film as Jordan recounts the important moments in their long lives.

As Midway recounts her past and present, Jordan uses imagery of her shores, sea line, and those vacated WWII military structures to juxtapose the two worlds that the albatross must contend with—the natural world, and that crafted by man.

They are, in one sense, ungainly birds, not made for land, but for the sea—and air. Their massive wings were created for gliding, and take-offs require a running start, like an airplane needs its runway, or a floatplane its waters.

The albatross can spend years at sea, and live six decades. They will travel thousands of kilometres each year, returning to the atoll.

“Old lovers reunite,” Midway tells us. “All take refuge on my shores.“

Midway is a love tale, and the albatross mates for life.

Each couple will lay a single egg and care for it tenderly. They will take turns heading to sea to find food for themselves and their hatchling. Their brief reunions between shift changes offer another chance to share affections. They dance together, bobbing their heads, crooning, and nuzzling their beaks. It’s an intriguing and entirely humanizing expression of their care for each other.

Jordan finds many ways to bring the audience onto this island and directly into the story. He also manages, most potently in his final scenes, to turn that thin sheet of screen and light into a portal through which the viewer finds his or her shared fate with the albatross.

“The seas have changed,” Midway tells us.

In the ocean, a floating grocery bag looks remarkably similar to jellyfish. And the rainbow of floating plastic looks like so much fruit of the sea. Bottle caps in particular, seem an irresistible lure.

It’s a hard job to feed a hatchling with an ocean of ever fewer fish and ever more human trash. An insidious trick played upon these lovely creatures as garbage fills the sea.

“All they eat and all they are made of comes from the sea,” Midway explains.

As parents pass food to their young, the hatchlings get their first meal of indigestible waste. Starving, weighted by that burden, they yearn for the sky and the sea—a dream some will never realize. This is the pain of all who share the tale of these beautiful creatures.

“Midway” looks set to tour film festivals for some time. Look for screenings in your area, or join the filmmakers in their efforts to help the albatross.

More information can be found at midwayjourney.com.