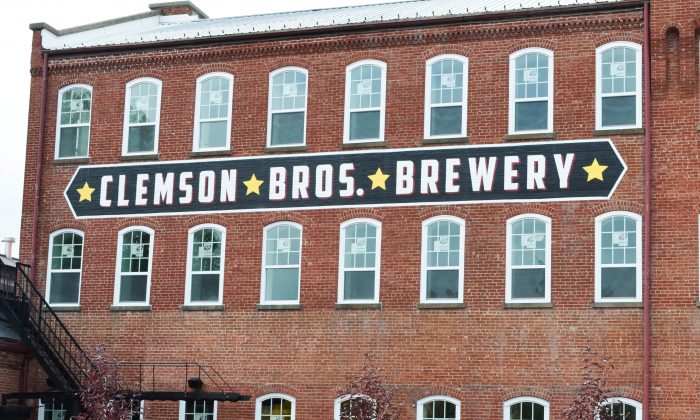 MIDDLETOWN—In a ceremony emceed by the city’s beaming mayor, the Clemson Bros. Brewery owners , with county and city officials, cut the ribbon on Oct. 8 for the what will be the first craft brewery along the Heritage Trail.

“Kenan and his family and his dad put up over $2.2 million to renovate this beautiful building. It’s not just this little building that we are looking at now. It’s almost the entire city block all the way down to the fire house.”

One of the reasons this brewery is opening here is because of the proposed Heritage Trail
— Joseph DeStefano, Middletown mayor

The brewery is more of a complex of business and residential structures. The ceremony on Oct. 9 celebrated the first phase, which encompasses the brewery, distribution company, and four high-end apartment units.

Kenan described the next phase as a bottling operation that would bring more jobs to the city. “I believe it’s a tremendous thing that if we could bring bottling back into the city, it’s going to create so many jobs.”

State Senator John Bonacic was on hand to give the assembled crowd of about 100 well-wishers some economic facts about the beverage industry. He said the craft beer industry is responsible for about 12,000 direct and indirect jobs in the state as well as profiting the agricultural industry, which supplies barley and hops.

“The impact of beer in general is $4.8 billion. The beverage industry—wine, ciders with a kick, spirits, and the beer—has a $27 billion impact in this state. Big business and growing.”

It’s the ability to just get the job done that makes us different, that sets us apart from the other counties
— Steven Neuhaus, Orange County executive

DeStefano said a commitment by County Executive Steve Neuhaus has breathed new life into the Heritage Trail section that will go through the city and will be important to downtown business like Clemson’s. “One of the reasons this brewery is opening here is because of the proposed Heritage Trail,” DeStefano said.

The county recently approved a $12 million project to complete the trail through Middletown. “He’s been a good partner on the Heritage Trail project,” DeStefano said of Neuhaus.

Neuhaus explained why the county has received the support of regional development agencies. “We don’t have plans just sitting on the shelf. It’s the ability to just get the job done that makes us different, that sets us apart from the other counties and the other areas around the state.”

He called the Porters’ hard work, determination, and financial investment the way to the American Dream. “It’s a textbook example,” he said.

After 26 months of determined effort, the younger Porter thanked his father. “He has been here for me for many years and continues to be here for me even though we continually butt heads. But it’s ok. At the end of the day, we are on the same page. All we want to do is get the job done.”

The family’s direct investment brought city, county, and state funding to the operation.

The elder Porter returned the compliment. “As for my boy here, I’m real proud of him.”

Then, the Porter family and officials gathered before a red ribbon and cut it at the mayor’s “one, two, three—boom!” With that, well-dressed guests flowed into the brewery for a tour and possibly a taste of Clemson’s craft brew.

In 2014 the Porters’ Heritage Restoration Properties LLC bought the facility and several nearby buildings.

DeStefano saw only good things coming from the partnership with the Porter family. “On behalf of the City of Middletown, Kenan, we want to say: Welcome to the city, welcome to the downtown community, welcome you and your dad, and thank you for the big investment you made in the city.”