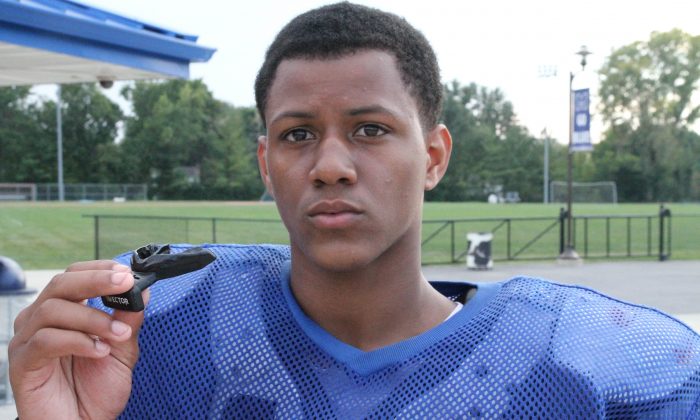 MIDDLETOWN—America loves football, but the parents of athletes in particular worry about the hard-hitting sport’s dangers—especially the possibility of concussions. Middletown High School has listened to parents’ concerns and become a national leader by adopting a new technology aimed at preventing head trauma.

The key is a high-tech mouthguard that alerts trainers of possible danger. On Sept. 9 and 10, staff from i1 Biometrics worked with the high school to custom-fit the cutting-edge mouthguard for every football player and to train staff and students in its use.

The device fits with a helmet and sends signals through an electronically laden microchip. CEO and president of i1 Biometrics, Jesse Harper called it an ESP chip “because it’s a sixth sense. It senses a lot of things others can’t see.”

We allow the athletic trainer to know everything that occurred to the player on the field in real time.
— Jesse Harper, president and CEO,  i1 Biometrics

Called the Vector mouthguard, the device works with software that uses a radio signal to alert the trainer on the sidelines to possible injuries in real time. At the pro level, Harper said trainers sit high enough to watch the entire field, then radio down to the athletic trainer on the sideline if they see something that happened that may lead to an injury.

“We allow the athletic trainer to know everything that occurred to the player on the field in real time,” Harper said, “and then he or she can insert their medical opinion at the time of the injury.”

Harper noted the Center for Disease Control estimates that 80 percent of concussions go unrecognized and undiagnosed, because they are so hard to see.

He also noted that the culture of football encourages a warrior mentality where players are not supposed to complain. “We downplay injury quite a bit.” That places a big responsibility on the shoulders of coaches and trainers “to keep the kids’ best interests in mind, then do the right thing to treat these children.”

Harper said the mouthguard is made for all types of contact sports that use a helmet—ice hockey, lacrosse, and “the 800-pound gorilla” football.

Players like it. David Coates, director for physical education, health, and athletics, said, “The kids thought it was really cool. They were really eager to try it and see what it was like.”

Senior linebacker Kenneth Middleton noted differences with other mouthpieces. “It just stays [in your mouth], even if you open your mouth.”

Junior running back Jordan Bryan appreciates how players can avoid injury and improve their play. “It will help us stay healthy. It will help us be a better team.”

The kids thought it was really cool.
— David Coates, director for physical education, health, and athletics

“It’s not just the football player,” Coates said. “Everyone else around the entire campus is getting excited about it. It gives us another element to keep our kids safe during a game of football.”

Coates said the sports medicine club helps with the program, as does the biomed program, which monitors the screens on the sidelines during a game. “Even our physics department is going to take the data and start utilizing it in the classroom.”

The device serves two important uses for high school football. Safety is key. The mouthguard flags possible hits or jarring movement. Harper said the second use is what he calls “coachable moments.”

“They can see what players are hitting improperly, who is lowering their head, what drills are having greater impacts,” Harper said. This is a teachable moment for coaches to improve a player’s technique and change behavior on the field, he said.

In this environment, coaches have a big role in keeping their players safe. “They teach [players] the proper way to do it,” Harper said.

Athletic trainer for the district Craig Olejniczak said the device gives him advance notice of concussive injuries. “A mouthguard with sensoring will give me as the athletic trainer real time data on the sideline, either in practice or in a game per player.”

Now the coach can make an immediate determination with medical staff to pull a player off the field.

“We have acquired here at the school some great technology, Olejniczak said.” BioMed club members can monitor the computer for alerts and can let him know a player has been hit hard enough that it flags the system. “It’s pretty exciting to have a tool that will give me extra eyes on the field.”

Middletown City School District Superintendent Dr. Kenneth Eastwood says technology should be used to “improve instruction and, in this case, assures safety of all of our kids.” Eastwood said now the coach can make an immediate determination with medical staff to pull a player off the field and refer to the team doctor, a specialist in head trauma.

Middletown is able to pay for the mouthguards out of their equipment budget. Harper speculated that other schools rely on athletic booster clubs to cover the cost.

Ahead of the Game

Harper said Middletown is a forward-thinking district. Middletown asked to participate in the company’s beta-testing phase of the mouthpiece in 2013. The test group consisted of different positions and ages during spring intramurals. Parents had to agree. “Most of the parents were for it because it’s another way to keep their son or daughter playing football safely,” Coates said.

The company took what it learned to improve the product. “We learned a lot of good things from player feedback,” Harper said.

A big improvement came in the mouthguard’s durability. “Players are rough on their equipment. We are giving them a high-cost piece of electronics that they are putting in their mouths and chewing on. You wouldn’t want them chewing on their iPhone, but we are asking them to do that on their mouthguards,” Harper said.

Today we are the only high school in the northeast that is actually using this technology with our athletes on the field.
— Eastwood, Middletown City School District superintendent

Using Vistamaxx, an elasto polymer developed by Exxon Mobil, the company hardened the device and worked on player comfort.

“We have the license as the only mouthguard company in the world to use this,” said National Sales Manager Mark West. “When it fits properly, it couples to the teeth.”

West said a mouthguard is “the closest place that we can attach [a sensor] that mimics the brain without actually putting a sensor in the head.”

Harper said this is where Middletown leads the way. The athletics staff want their players to be bigger, faster, and stronger, but they also ascribe to the same goal as the company—to also be safer.

Harper wants to keep sports at a high level. “It’s about what can we do to keep these players safe, and maintain the integrity and wonder of sports, in the game, in athletics.”