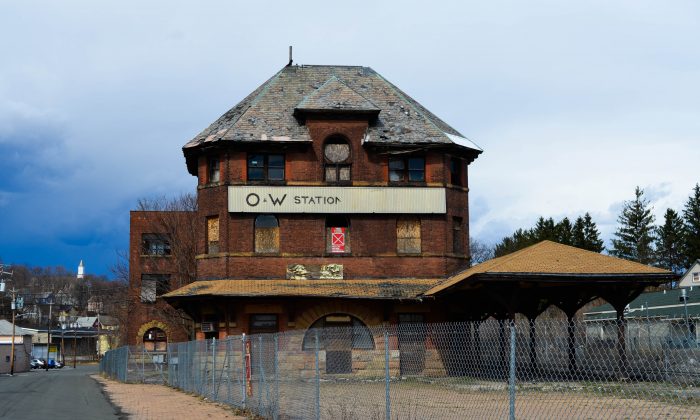 A $7.9 million federal grant the community health organization applied for to make the historic railway station the health center’s new home did not come through. “Unfortunately the increasing costs of the problems with the building being vacant so long, the fire damage and all the other damage related to the building, it was not feasible to move ahead with that project,” DeStefano said.

MCHC explored other options and found Touro College’s Middletown campus a receptive partner. Touro and MCHC have reached a tentative agreement to join forces. MCHC will move all its services except dental care to a 40,000 square foot wing at Touro’s Horton Center. MCHC has welcomed Touro’s medical students to do clinical rotations.

The move will strengthen the relationship as MCHC moves into a section of the Horton complex that formerly was a hospital. Butler said the rooms are big enough to expand services. The wing will be updated with air conditioning and required office amenities. “We will be modernizing a lot of the office space,” Butler said.

The buildings now used will be vacated by present staff and repurposed for the changing needs in health care. “The landscape is expanding and we need to do our part to address some of the needs and issues in our own community,” Butler said. “That’s what we are doing by partnering with Touro.”

She said the situation is evolving and updates will come in the future. Butler did not elaborate on financial arrangements as the lease is still in discussion.

DeStefano said that the city and MCHC are still finding ways to keep part of the historic railway station. “Historic preservation we decided is important to our community. We realize that and we are going to continue to pursue working with MCHC on other options that could preserve possibly as much of the building as possible,” he said.

He said the building may still be demolished if nothing works out. “The O&W project is very near and dear to Middletown. We have been holding on to it for a very long time, not to say we are going to release it at this point,” Butler said.

Butler said her staff “can’t wait to come up here, continue to stay in our community, and expand in the buildings that we have presently.” The organization has received state grants, part of which will be allocated for the move to Touro and some for the O&W renovation. “We are working with the state right now to figure out how we can utilize some of the funding for both sites,” Butler said.

Butler said the majority of the staff that work at other locations will be moving and the Center will hire more staff. To start MCHC will move into half of the space. Obstetrics, internal medicine, pediatrics, podiatry, and other medical services will come to the Horton complex. Dental care services will remain at its present location.

Middletown will not give up on the O&W. We love that building.
— Teresa Butler, CEO, Middletown Community Health Center

Butler still sees hope in saving the O&R station. “Middletown will not give up on the O&W. We love that building. Believe me, as the CEO, we have tried to explore every avenue possible. We are not giving up.” MCHC will continue to own the property.

Developer Tony Danza has developed the Touro College facility and expressed his support for the move.

MCHC was established in 1971 and is federally qualified to offer affordable health care to Middletown and surrounding areas. Butler suggested services might be offered in neighboring Sullivan County. two new offices have been set in Milford PA and Washingtonville.

A dental care van has recently come into service. All MCHC providers are credentialed at Orange Regional Medical Center in Middletown, NY and/or Bon Secours Community Hospital in Port Jervis, NY, according to the organization’s website.