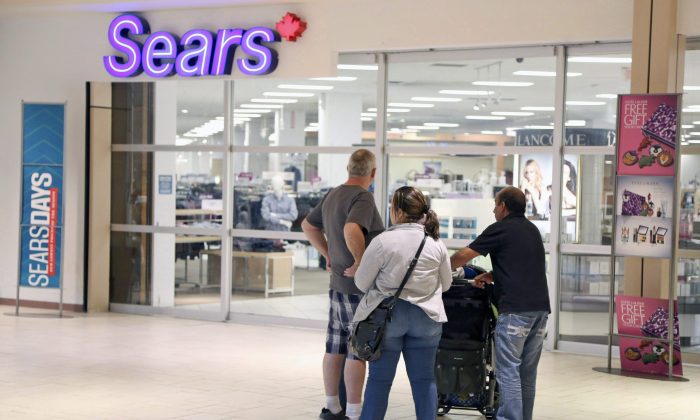 A Sears store entrance at the Marlborough Mall in Calgary. The large department store is no longer providing a solid anchor for shopping malls. (The Canadian Press/Mike Ridewood)
Business & Economy

Stores, malls at an inflection point
By Rahul Vaidyanath

Some are calling it a “retail apocalypse” in the United States due to mounting store closings and bankruptcies. The crisis puts the focus on mid-tier retailers like Sears.

The factors spurring the transformation of retail are also playing out in Canada, but the impact isn’t as alarming, say analysts.

For now, the shakeout is not simply an issue of Amazon eating everybody’s lunch. The growth in online shopping is undeniable, but it is still a small piece of the pie. Statistics Canada reported that in January, on a year-over-year basis, total retail trade rose 3.4 percent while its retail e-commerce portion, which makes up only 2.7 percent of the total, rose 17.2 percent. In the United States, total digital commerce makes up just 10 percent of retail sales.

The impending death of mid-tier retail and the overbuilding of retail space, particularly in the United States, are also catalysts behind a major disruption.

Sears is arguably the poster child for retail’s woes and its management recently expressed doubt that the store can continue as a going concern.

“Consumers no longer see a reason to shop them. Why would they, when they can go online and get their desired items at a reasonable price and often delivered in the next day or two,” said Mladen Svigir, principal at consulting firm Jackman Reinvents, in an email.

Aggregator stores, like Sears, are caught in no man’s land. At the upper end, companies are also investing in stores to create a memorable shopping experience.

Some higher-end brands may not just want to be in an aggregator store—for example, Zegna could be in a Saks or Nordstrom—but also have their own stores, business strategy adviser Mark Satov of Satov Consultants said in a phone interview.

This problem for mid-tier retailers is not going away anytime soon.
— Mladen Svigir, Principal, Jackman Reinvents

“They don’t want that [aggregator store] to be their whole representation because they want to control the experience that their customers get,” Satov said.

At the lower end of the spectrum, Dollarama’s successful business model is fending off e-commerce; the discount retailer plans to open 1,700 stores across Canada.

By cutting costs, Dollarama is able to bring more value to its customers. It is a quick and easy way to buy low-priced products and give customers the sense of saving money.

Mid-tier retail with companies like Sears are punching bags, being hit from a number of directions.

“Combine with all of this the increased level of selection and service provided by online retailers, and this problem for mid-tier retailers is not going away anytime soon,” Svigir said.

Retailers need to adapt—quickly. EBay CEO Devin Wenig, in an interview with CNBC, called the fourth quarter of 2016 an inflection point and the “end of retail as we know it.” His message was that stores have to provide a great customer experience in order to survive—or close.

Svigir pointed out how, for example, Nordstrom offers a restaurant/bar in some stores, while some malls offer specialty grocery stores or health/beauty experiences.

In Sears’s case, it has not made the necessary transformative investments, Satov said.

In the United States, Target, which failed abruptly in its Canadian expansion, plans to remodel hundreds of stores over the next two years. Kohl’s is shifting to smaller stores.

My view is that analog channels are not going away anytime soon.
— Mark Satov, Satov Consultants

Perhaps as much as “retail apocalypse” may be becoming a catch-phrase, “omnichannel” may be too. Retailers are realizing that more important than ever is the customer shopping experience and being able to interact with the customer in a number of different ways. The death of mid-tier retail stems from a more discerning customer.

Retailers that have been able to harness the power of digital while improving the in-store experience are better positioned to survive.

The Challenge for Malls

The United States has an excess of shopping mall capacity. Its square footage per capita is 23.6—which, according to the Retail Council of Canada (RCC), is 43 percent more than in Canada. An RCC study also found that Canadian malls are as busy as U.S. malls but far more productive in terms of the sales-per-square-foot metric.

In the United States, nine retailers filed for bankruptcy in the first quarter of 2017 alone. In contrast, nine was the total for all of 2016, according to CNBC.

In recent years, Canada has seen a smaller share of bankruptcies and closures of a number of domestic retailers such as Jacob, Smart Set, and international chains like Mexx and BCBG.

“Canada has been more disciplined about building square footage per capita and that will help us, but it will not inoculate us against the potential issue,” said Satov.

Other than for Alberta, 2016 was a healthy year for shopping malls in Canada, with productivity up 2.4 percent and investment reaching a record high of $6.8 billion, according to CBRE research. A welcome development, given the overbuilding in the United States, is that after the completion of many large development projects, the total space under construction is down to its lowest level since 2010.

“For the retailers who are producers as well, they have to spend more in those spaces to make people want to come there,” Satov added.

Satov said the mid-tier malls, which aren’t anchored by high-end retailers, are in trouble, whereas the high-end or “A-malls”—like Toronto’s Yorkdale—continue to reinvest and are full of customers.

“Malls have to work harder to prove to the retailers that they have given them a space that people want to come to and help them market it as such,” Satov said.

“‘B’ and ‘C’ type malls that still rely on retailers such as Sears Canada for anchor tenants will suffer as Sears (and others like it) continue their descent,” Svigir said.

“Unless they can find a way to reinvent and create experiences (or offer convenience) that will bring consumers in and give them a reason to shop, mid-tier malls will go the way of mid-tier retailers in recent years,” Svigir said.

While the retail upheaval in Canada hasn’t been as drastic as in the United States, Canada is at one disadvantage compared to the United States—the Canadian consumer has less disposable income and is more in debt than his or her American counterpart.