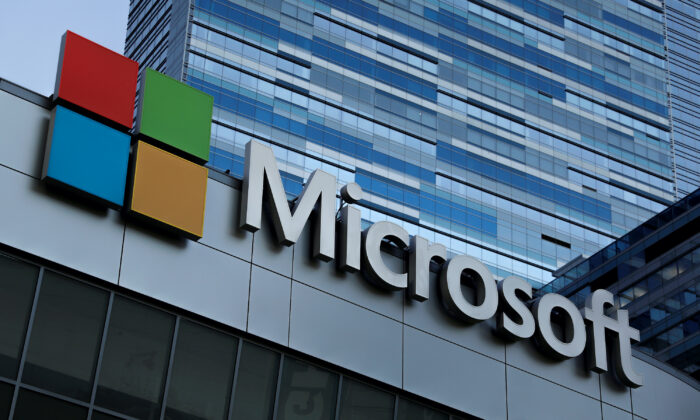 The Microsoft sign is shown on top of the Microsoft Theatre in Los Angeles, Calif., on Oct. 19, 2018. (Mike Blake/AP)
Markets

Microsoft Corporation shares rallied out of the gate Wednesday following the release of its quarterly results.

Stifel analyst Brad Reback maintained a Buy rating and increased the price target from $325 to $380.

Bank of America (BofA) Securities Brad Sills reiterated a Buy rating and hiked the price target from $340 to $365.

Piper Sandler analyst Brent Bracelin maintained an Overweight rating and lifted the price target from $310 to $352.

The broad-based strength appears sustainable as businesses of all sizes embrace the company’s growing suite of infrastructure, productivity, and security solutions, the analyst said.

The server annuity business benefitted from revenue recognition/mix, Sills said. Steady normalized low-single-digit growth for server and windows demonstrated Microsoft’s ability to capture incremental growth in cloud, though not at the expense of these large, profitable legacy businesses, he said.

Microsoft Shares Poised For Much Higher Gains Into 2022, Wedbush Says

Microsoft handily beat Azure estimates by 300 basis points, with 50 percent cloud growth, and gave December guidance well above expectations, Wedbush analyst Ives said. This speaks to a “cloud party” that is still in the middle innings of playing out for Microsoft, he added.

“We believe the strong numbers from Nadella & Co. is a broader indication of strength we expect to see across the enterprise cloud software landscape throughout this earnings season,” Ives said.

These results and stronger guidance, the analyst said, will be enough to move the stock much higher into 2022.

The cloud model shift at Microsoft contributed to the highest quarterly growth rate in seven years, and improving cloud economies of scale have also contributed to operating margin expansion to 44.7 percent, the highest margin in over a decade, the analyst said.

The analyst now forecasts Microsoft Cloud revenue scaling above a $100 billion annualized run-rate within the next three quarters.

Credit Suisse’s bullish thesis on Microsoft is premised on the company being one of the likely hybrid cloud winners, given the broad portfolio of on-prem server products, public cloud, and SaaS applications, rising Azure profitability and continued success of O365, analyst Ju said.