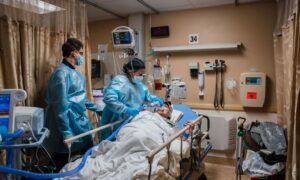 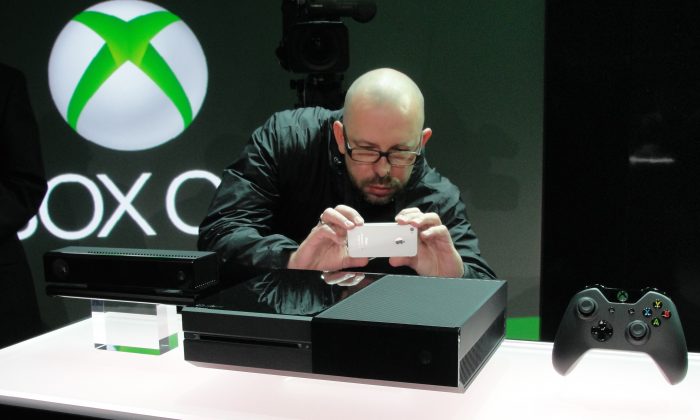 An iPhone is used to snap a picture of the next generation Xbox One videogame console at the Microsoft campus in Redmond, Wash., May 21. Microsoft said it is ok to play used games on the machine. (Glenn Chapman/AFP/Getty Images)
News

One product line at Microsoft Corp. has an undeniably bright future, and it’s not Windows, Office, or Surface tablets.

That product line is video gaming and entertainment, and on May 21, the Redmond, Wash.-based software developer unveiled its next generation gaming console, the Xbox One.

We’ll briefly look at the technical specs, which blow away the previous generation console introduced in 2005. The device has an eight-core CPU-GPU combo manufactured by AMD, a Microsoft-made 500GB hard-drive, and Blu-ray. On the software side, the GUI reminds one of Windows 8, and navigation is controlled using voice and gesturing via the Kinect add-on.

With the Xbox One, Microsoft has positioned itself as a competitor not only to Sony Corp. and Nintendo Co., but also Apple Inc. and Roku Inc.

The Xbox streams all the major content providers including Amazon, YouTube, Hulu, and Netflix, but in addition, it has signed agreements with Verizon Communications Inc. to allow FiO customers to stream broadcast TV from the device. Comcast Corp., the nation’s biggest cable provider, allows Xfinity cable TV subscribers to watch on-demand movies from Xbox.

Last month, in its first-quarter financial report, Microsoft reported a 56 percent increase in its Entertainment and Devices Division, which includes sales of Xbox, Windows Phone, Skype, and related content. The Xbox division itself saw its revenues increase by $641 million compared to the same period in 2012, a gain of 55 percent.

While Apple has traditionally not disclosed its revenue from Apple TV, it is estimated to be far smaller according to research analysts.

A Major Threat to GameStop?

Microsoft was mum on what kind of DRM (digital rights management) features will be included on the Xbox One. There have been conflicting reports, but most technology blogs indicate that the device will need to be regularly connected to the Internet, and there will be some form of restrictions on used games.

The most frequently cited way to restrict reselling of used games is forcing users to pay a one-time fee on a second install. Microsoft has not confirmed or denied this requirement.

If proven to be true, Microsoft’s decision could pit hardware manufacturers and software developers against retailers and consumers.

The decision will have huge ramifications on the gaming industry, and could cripple the nation’s biggest video game retailer, GameStop Corp. (NYSE: GME).

GameStop, with more than 4,400 retail locations in the United States and more than 2,100 locations internationally, is the industry’s biggest brick-and-mortar retailer with almost $8.9 billion in sales in the fiscal year ended Feb. 2.

The Grapevine, Texas-based company generated $2.4 billion, or 27.4 percent of its net sales from pre-owned video game products, including video game software and hardware. From a gross profit perspective, $1.2 billion, or more than 48 percent, came from sales of pre-owned video game products. In other words, used games contributed almost half of the company’s gross profit in the last year, according to its annual filings with the Securities and Exchange Commission.

The inability to play used discs on next generation consoles is a huge storm cloud hanging over the company. Unsurprisingly, GameStop has been on the offensive in lobbying hardware manufacturers to reconsider their decision.

“Consumers want the ability to play pre-owned games, they want portability in their games; they want to play physical games,” GameStop Chief Financial Officer Rob Lloyd said at the Goldman Sachs Technology and Internet Conference earlier this year, according to VG24/7, an industry website. “And to not have those things would be a substantial reason for them not to purchase a new console.”

Lloyd went on to say that according to his company’s research, 60 percent of current customers wouldn’t purchase a new console due to those concerns.

But GameStop will have some time to shift its strategy. It has invested heavily in its digital downloadable software sales platform as well as diversifying its revenues by acquiring kongregate.com, an online casual gaming website, which generates advertising revenues.

So far this year, shares of GameStop have out performed, climbing 43 percent since Jan. 1, compared with a 17 percent increase of the benchmark S&P 500 Index over the same period.

Rival Sony teased its upcoming PlayStation 4 (PS4) in February, but details shared by the Japanese electronics giant were scant.

The two companies are neck and neck in terms of sales for current generation consoles. As of December 2012, market research giant IDC said worldwide sales of the PS3 were 77 million units versus 76 million units of Xbox 360, since their respective introductions.

Sony has taken a decidedly different approach with the PS4 and emphasized the device’s ability to play games, catering to hardcore gamers. “We wanted to ensure that nothing would come between the platform and the joy of play,” said PS4 lead system architect Mark Cerny in a release announcing PS4 in February. Sony also has had a better track record of collaborating with smaller game developers, according to industry blogs.

The PS4 represents an opportunity that may help Sony reverse its recent course. Over the last four fiscal years, Sony has generated annual losses of 178.5 billion yen ($1.7 billion) on average.