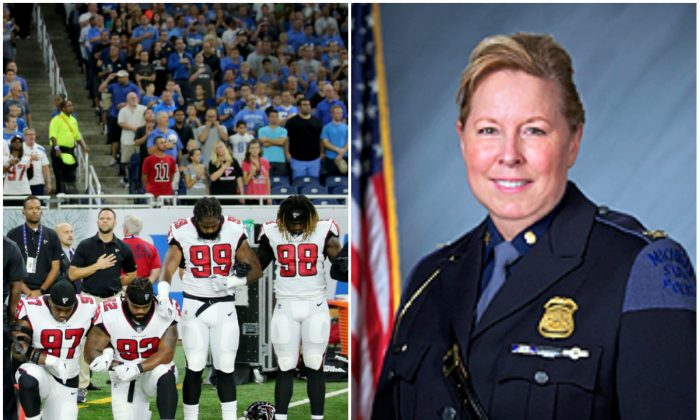 L: Members of the Atlanta Falcons football team Grady Jarrett and Dontari Poe take a knee during the playing of the national anthem prior to the start of the game against the Detroit Lions at Ford Field on Sept. 24, 2017, in Detroit, Mich. (Leon Halip/Getty Images); R: Michigan State Police Director Col. Kriste Kibbey Etue. (Michigan State Police)
US News

On Sunday, Sept. 24, she shared a meme on her personal Facebook page that reads:

“Dear NFL: We will not support millionaire ingrates who hate America and disrespect our Armed Forces and Veterans. Who wins a football game has ZERO impact on our lives. Who fights for and defends our nation has EVERY impact on our lives. We stand with the Heroes, not a bunch of rich, entitled, arrogant, ungrateful, anti-American degenerates. Signed, We the People.”

The meme is an apparent criticism of NFL players who refuse to stand during pre-game national anthem. Many have taken a knee instead, some have raised fists, and some have been sitting or even stretching during the anthem.

The activity started as a protest against instances where police appear to kill a black person without due cause. Some have used such incidents to accuse police in general of racism.

Not standing during the national anthem has been traditionally considered disrespectful for Americans, especially to people who have signed up to risk their lives for the country—soldiers and veterans.

President Donald Trump has criticized the players who chose this form of protest.

“Wouldn’t you love to see one of these NFL owners, when somebody disrespects our flag, to say ‘Get that son of a [expletive] off the field. Right now. Out. He’s fired’?” Trump said during his speech at Huntsville, Alabama, rally on Sept. 22 (1 hour 11 minutes in).

His comments prompted reportedly over 200 players to take part in the protests, making it unclear if they resorted to the behavior to identify with the original idea or to show disagreement with the president.

Etue has apologized for posting the critical meme and deleted it.

“It was a mistake to repost this meme on Facebook and I sincerely apologize to anyone who was offended. I will continue my focus on unity at the Michigan State Police and in communities across Michigan,” she said in a statement.

“She’s done great service for the state so the way I view it is: People make mistakes. She recognized that. And let’s keep moving forward,” he said, Mlive reported.

She will still face an internal Michigan State Police investigation, according to The Associated Press.