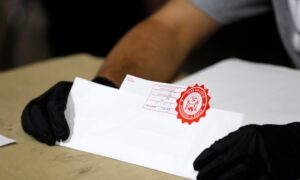 The office of the Michigan secretary of state has told two county clerks that they don’t legally have to provide access to voting equipment maintained by their office if ordered to do so by county boards.

“The Board has no authority to require you or any municipal clerk to provide external access to voting equipment maintained by your offices, and neither you nor municipal clerks in Cheboygan County should provide this access,” Jonathan Brater, director of the Michigan Bureau of Elections, told Cheboygan County clerk Karen Brewster in a May 20 letter obtained by The Epoch Times.

Another official from the office of Secretary of State Jocelyn Benson, a Democrat, sent a similar letter on the same day to the clerk in Antrim County, conveying the view that the board of commissioners there has no authority to require an audit or compel the providing of election records.

Commissioners can seek such records through a Freedom of Information Act request, Lori Bourbonais, director of the Elections Administration Division at the bureau, wrote.

“However, they have no authority to direct county or local clerks to provide this information, nor are any opinions they have about the manner in which local clerks conduct voting and registration transactions binding on local clerks in any way,” she wrote.

Brewster and Antrim County clerks also were advised not to grant access to voting equipment to firms not accredited by the U.S. Election Assistance Commission.

Critics of an ongoing audit of ballots and machines in Arizona’s largest county have noted that the company leading the audit, Cyber Ninjas, lacks accreditation from the commission.

Antrim County’s Board of Commissioners and its county clerk were asked at a May 6 board meeting to look into whether, and how, an audit of the Nov. 3, 2020 election could be required or requested. The board worked with Antrim County Clerk Sheryl Guy to ask the Bureau of Elections for answers.

Guy told commissioners during the meeting that voter registration rolls belong to the townships and alleged the board could not demand an audit because it lacked jurisdiction over the townships.

Commissioner Dawn LaVanway, a Republican, moved two weeks later to have the board complete a forensic audit of the election. The motion failed.

The county immediately after the election last year reported that Democrat Joe Biden received over 3,000 more votes in the county than then-President Donald Trump. However, the county twice updated the results, with Trump ultimately being shown ahead by nearly 4,000 votes.

Guy initially pinned the issue on a combination of a software glitch and human error. She and Benson later attributed what happened solely to human error, specifically a failure to update election machine programming. A hand recount later found another difference in the count of about 10 votes.

In Cheboygan County, the Board of Commissioners tasked a subcommittee to explore the desire by some residents to have an audit of the 2020 presidential election. The subcommittee has been looking at different things and trying to collect more data, board Vice Chairman Richard Sangster told a meeting late last month.

A team including Matthew DePerno, who represented Bailey, offered to do a free audit in the county. Sangster said that in his view, nothing is free. Board Chairman John Wallace said the subcommittee will make a recommendation to the board after completing its exploration.

Multiple residents spoke during the meeting, some in favor of ordering an audit and others against the idea.

Wallace and Sangster didn’t immediately respond to requests for comment on the letter from Benson’s office. Dominion didn’t return an inquiry. Guy didn’t respond to a voicemail or an email.

Meanwhile, Brewster declined to provide a copy of the letter, telling The Epoch Times in an email, “Please request any information with a FOIA Request!” When informed that the letter had been obtained, and asked for comment, she didn’t respond.

State law indicates that county boards lease, buy, or otherwise acquire electronic voting systems, including machines. That means the boards can order an audit, Beth Bridgman, leader of a group called the Cheboygan Freedom Fighters, which is advocating for an audit, told The Epoch Times.

“Our county paid for those machines, right? On behalf of the people, our commissioners did. And those machines are our physical property,” she said.

The funding for the audit, if it were ordered, would come from money donated to Bailey’s legal case and from fundraising, she said. It could be conducted by Cyber Ninjas, the firm running the audit in Maricopa County, Arizona.