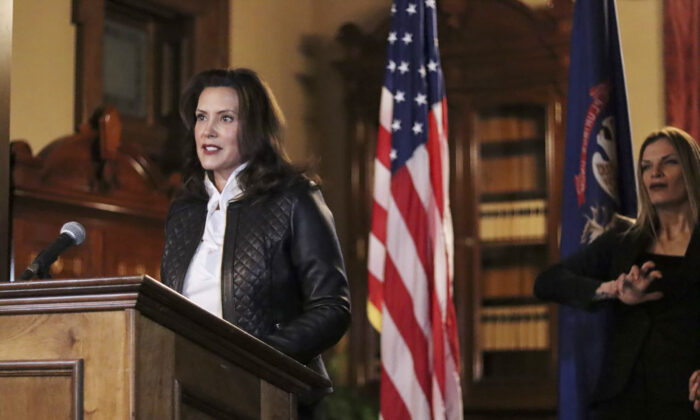 Michigan Gov. Gretchen Whitmer addresses the state during a speech in Lansing, Mich., Oct. 8, 2020. (Michigan Office of the Governor via AP)
US News

Michigan Gov. Gretchen Whitmer was aware a militia group was plotting her kidnapping and she and her family members were moved around, state Attorney General Dana Nessel revealed Friday.

State and federal authorities announced Thursday that 13 men were facing charges for plotting to take Whitmer, a Democrat, from her vacation home.

“We’ve been consistently updating the governor as events occurred over the course of the last couple months. So she was aware of things that were happening. At times, she and her family had been moved around as a result of activities that, you know, law enforcement was aware of,” Nessel said during an appearance on “CBS This Morning.”

Authorities said the group, which included members and associates of the Wolverine Watchmen militia, also tried to obtain the addresses of law enforcement officers and made plans to storm the State Capitol in Lansing.

The men face at least 20 years in prison if convicted. Some face life in prison.

Members were allegedly upset at what they saw as government overreach.

Whitmer’s emergency orders implemented during the COVID-19 pandemic have sparked widespread backlash, including a number of lawsuits.

Whitmer in remarks from the State Capitol Thursday blamed President Donald Trump for the alleged kidnapping plot, prompting him to say on Twitter that she’s “done a terrible job.”

“My Justice Department and Federal Law Enforcement announced today that they foiled a dangerous plot against the Governor of Michigan,” he wrote. “Rather than say thank you, she calls me a White Supremacist—while Biden and Democrats refuse to condemn Antifa, Anarchists, Looters and Mobs that burn down Democrat run cities.”

Nessel, asked to respond to Trump, said she’s unsure if he understands “the power of his words.”

“Or if he does very well understand the power of his words, and he’s trying to incite some sort of chaos or our anarchy that, frankly, these groups thrive upon,” she said.

“But either way, you know, I guess my message would be, to him and to any other elected leaders, that sort of traffic in this sort of rhetoric to understand the power of their words.”