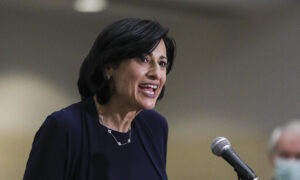 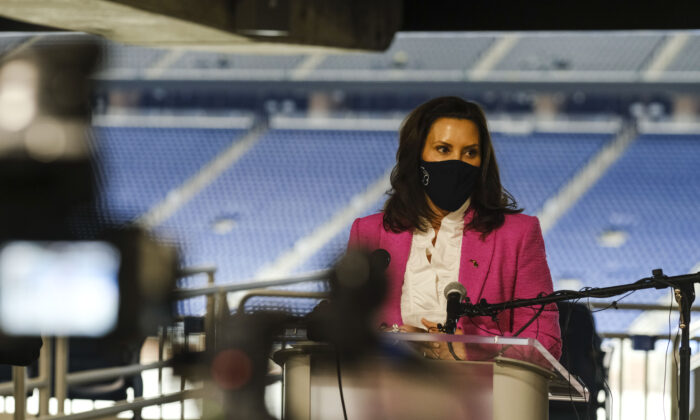 Michigan Gov. Gretchen Whitmer speaks to members of the press in Detroit, Mich., on April 6, 2021. (Matthew Hatcher/Getty Images)
US News

Michigan Gov. Whitmer Apologizes After Photograph Showed Her Breaking Her Own Rules

Michigan Gov. Gretchen Whitmer over the weekend said she “made a mistake” when she broke her own rules while gathering with a dozen others in a crowded restaurant on Saturday.

“Throughout the pandemic, I’ve been committed to following public health protocols,” Whitmer, a Democrat, said in a statement to news outlets.

“Yesterday, I went with friends to a local restaurant. As more people arrived, the tables were pushed together. Because we were all vaccinated, we didn’t stop to think about it. In retrospect, I should have thought about it. I am human. I made a mistake, and I apologize.”

The photograph showing Whitmer with the group, none of whom wore masks, was posted on Facebook before being obtained and published by Breitbart News.

The group was eating at the Landshark in East Lansing.

An order Whitmer issued earlier this month states that gatherings at restaurants are prohibited unless they’re comprised of six or fewer people.

Tori Sachs, executive director of Michigan Freedom Fund, a freedom-oriented nonprofit, called for the governor to immediately end restrictions on restaurants in light of what happened.

“Will @GovWhitmer & @MichiganHHS show us the science that proves it’s safe for Whitmer to drink at a bar with over 6 people at her table but not safe or allowed for the rest of us? This is ridiculous, Whitmer must end the restrictions now!” Sachs wrote in a tweet.

The governor last week said she will likely end most mandates issued during the COVID-19 pandemic on July 1.

“On July 1st, the broad mask rule will be lifted, but I want to be clear about the fact that businesses and workplaces are well within their rights to require masks as patrons go in. So, let’s give them our support as they navigate what’s best for them and their workforce and their patrons,” Whitmer said.

She also said that because of the Centers for Disease Control and Prevention’s new guidance on masks, she would be “going mask free.” The health agency recently updated its mask recommendations, advising fully vaccinated people that they could go without the face coverings indoors.

Whitmer, in her first term, is already facing an IRS complaint regarding a trip she took to Florida last month.

Lawmakers in Michigan’s House of Representatives plan this week to vote on a bill that would require the governor to notify them when she plans to leave the state.