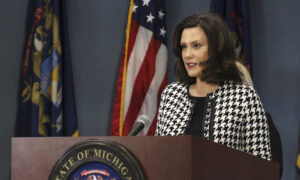 Michigan Governor: Stay-at-Home Order Will Be Extended Into May
0

A Republican U.S. congressman has sued Michigan Gov. Gretchen Whitmer over her handing of the outbreak of the CCP virus, commonly referred to as the novel coronavirus, saying her emergency actions violate his constitutional rights.

Rep. Paul Mitchell (R-Mich.) filed the lawsuit (pdf) in U.S. District Court for the Western District of Michigan on May 4 against Whitmer and state Department of Health and Human Services Director Robert Gordon, who also has issued emergency orders in an effort to stem the outbreak.

The lawsuit argues that Whitmer’s CCP virus-related emergency orders violate the separation of powers between the legislative and executive branches, and also people’s rights to association, intrastate travel, and commerce.

“There is no question that infectious diseases are, unfortunately, a part of everyday life,” Mitchell wrote in the lawsuit. “Some are more susceptible to certain illnesses than others. But Michiganders can and do take reasonable, private action to protect themselves from infection without the need to shut down civil society.

“Given that the projected surge has not occurred, there is no basis, either legally or factually, to continue any further mandatory lockdown orders under criminal penalty,” the suit said.

It also labels the statewide restrictions “unreasonable” for areas of Michigan where there are few cases. The filing describes Whitmer’s measures as “lockdown orders,” which Mitchell says “shock the conscience” and interfere with “deeply-rooted liberty and property rights.”

“I think we need to clarify the extent of what an emergency is and the extent of those powers and re-enforce that people have constitutional rights,” Mitchell, a businessman who was first elected to the U.S. House in 2016, told The Detroit News.

“Precluding people from traveling across the state to visit their grandchildren for their birthday, really?” Mitchell asked. “We’ve gone over the edge on some of this.”

Mitchell said in the lawsuit that the governor’s order had prevented him from getting medical treatment for a condition he has that results in bone-on-bone contact in his knee.

“No Michigander, including Mitchell, should be forced to choose between risking criminal prosecution and economic sanctions under the Lockdown Orders on the one hand or seeking medical treatment on the other,” the suit said.

Mitchell told The Detroit News that emergency powers granted to a governor weren’t meant to allow a single officeholder to manage state affairs for an extended period of time. Whitmer’s spokeswoman declined to comment to the Detroit News, citing the pending litigation.

“That wasn’t the intent of the Emergency Powers Act,” Mitchell said. “And that kind of power is unconstitutional.”

The suit challenging Whitmer’s stay-at-home order comes shortly after she extended her state of emergency, which was initially declared on March 10, without the approval of Michigan legislators.

The state is under a stay-at-home order through May 15. It includes not allowing people to travel to other homes under most conditions and bars the sale of items deemed nonessential at many stores. Residents have also been advised to wear face masks when in enclosed public spaces.

The extension has prompted hundreds of people to protest the order in front of the Michigan State Capitol in Lansing, claiming that Whitmer is abusing authority by extending restrictions.

However, the governor said she is “not going to make decisions about our public health based on political games,” and has warned that the state is at risk of a second surge if it reopens the economy too quickly.

Michigan has reported more than 4,000 deaths from COVID-19, the third-highest number in the nation, and about 44,000 total cases, although the growth in cases has slowed.