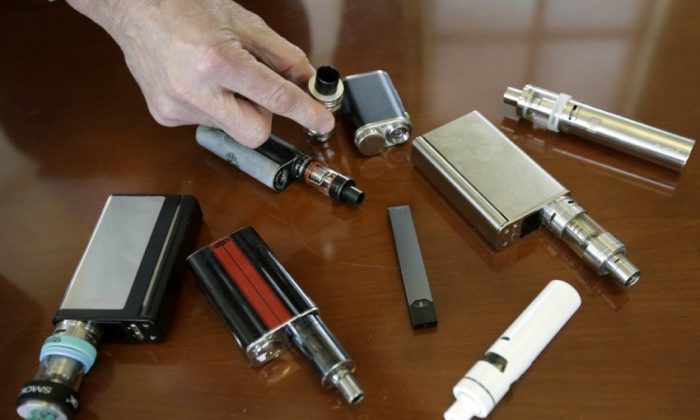 Robert Keuther, a high school principal in Marshfield, Mass., displays vaping devices confiscated from students in restrooms or hallways at the school in a file photo. (Steven Senne/AP Photo)
US News

A 17-year-old Michigan boy was forced to undergo a double lung transplant and faced “imminent death” after sustaining severe injuries from vaping, a Detroit hospital said on Tuesday.

The unnamed boy was first admitted to a local hospital on Sep. 5 with what was initially believed to be pneumonia, doctors at Henry Ford Health System in Detroit said in a press conference.

However, his condition quickly deteriorated and he was intubated before being transferred to the Children’s Hospital of Michigan, where he was placed on life support.

He was later transferred to Henry Ford Health on Oct. 3, where scans showed that virtually all of his lung had turned into scar tissue.

Doctors successfully completed a six-hour transplant on Oct. 15, and the young patient was given a “very good prognosis,” but still faces a long recovery, they said.

“This teenager faced imminent death had he not received a lung transplant,” said Dr. Hassan Nemeh, surgical director of thoracic organ transplant at Henry Ford Hospital, who was among the team of doctors who performed the boy’s surgery.

“This is a preventable tragedy. And we have so much respect for this family for allowing us to share their pain to prevent the same from happening to others. The damage that these vapes do to people’s lungs is irreversible. Please think of that—and tell your children to think of that,” he added.

Family members of the boy described him as a “perfectly healthy” and active kid before the horrifying ordeal.

They said in a statement that they had asked doctors to make public the “horrific life-threatening effects” of vaping.

“Within a very short period of time, our lives have been forever changed. [The boy] has gone from the typical life of a perfectly healthy 16-year-old athlete… to waking up intubated and with two new lungs, facing a long and painful recovery process as he struggles to regain his strength and mobility, which has been severely impacted,” they said.

On Nov. 5, the Centers for Disease Control and Prevention (CDC) reported there had been 2,051 confirmed and probable U.S. lung injury cases and 39 deaths across 49 states associated with e-cigarettes or vaping products.

The CDC said that lung samples taken from 29 patients with vaping-related injuries all contained vitamin E acetate, an oily chemical added to some THC vaping liquids to thicken or dilute them.

They hailed the discovery as a “breakthrough” in the investigation, noting that, “This is the first time that we have detected a potential chemical of concern in biologic samples from patients with these lung injuries.”

The CDC continues to recommend that people should not use e-cigarette, or vaping, products that contain THC, particularly from informal sources like friends, family, or in-person or online dealers.

The announcement by Henry Ford Hospital comes shortly after President Donald Trump said he will be meeting with representatives of the vaping industry and medical professionals, as well as state representatives, to discuss a solution to the “vaping and e-cigarette dilemma.”