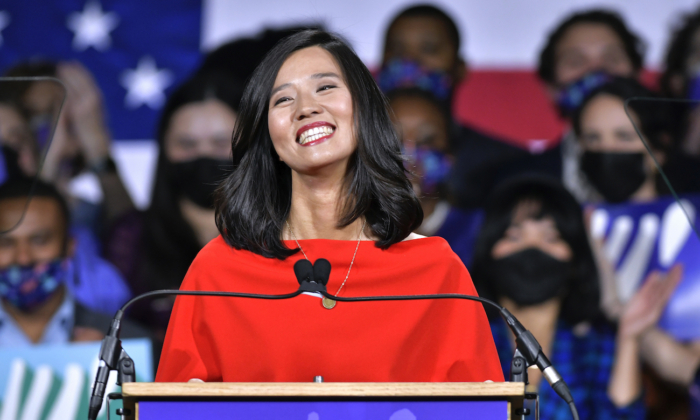 Voters in Boston elected City Councilor Michelle Wu, a 36-year-old Democrat and the daughter of Taiwanese immigrants, to be their mayor on Tuesday.

Wu’s campaign focused on progressive policies such as policing reforms, rent control, and a  city-level Green New Deal agenda. Wu has also proposed to expand the city’s paid family leave policy to include women who’ve just had an abortion.

Another of Wu’s top campaign promises was to create a “fare-free” public transit system, noting that, “safe, reliable, affordable, and sustainable transportation is the foundation for shared prosperity and health.”

Wu, who has a close relationship with Massachusetts U.S. Senator Elizabeth Warren, moved to the city from Chicago and attended Harvard University and Harvard Law School.

She received a number of high-profile endorsements, including support from acting Mayor Kim Janey, Edward Markey, and U.S. Rep. Ayanna Pressley, a former Boston city councilor, as well as Warren.

Wu was a front-runner for the vote, maintaining a wide margin in the polls against Essaibi George and leading the race by 30 points just days before the election, according to a survey by Emerson College.

Wu previously told NBC Asian America that she aimed to represent all communities in Boston while noting that her Taiwanese immigrant heritage made her an untypical candidate for mayor of Boston.

“I recognize the ways in which I’m not the typical mold of a Boston politician, but it’s really not just gender and ethnicity or age necessarily, although [it’s] all of those things,” she said.

Wu’s comments about adding paid time off after abortions came during a campaign event promoted by Planned Parenthood and NARAL Pro-Choice America Foundation. Planned Parenthood performed 345,672 abortions in 2018-19 – an increase of nearly 13,000 from the previous year, according to the Susan B. Anthony List and the Charlotte Lozier Institute. Both are pro-life organizations.