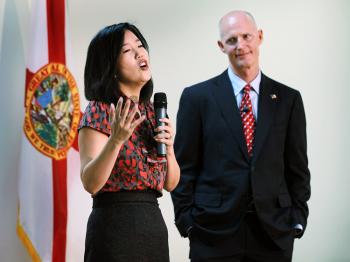 Michelle Rhee, who was named as the Informal Education Advisor to the Governor, speaks as Florida Gov. Rick Scott (R) listens during a visit to the Florida International Academy on Jan. 6 in Opa Locka, Florida. (Joe Raedle/Getty Images)
US

Andrea Hayley
Reporting on the business of food, food tech, and Silicon Alley. Studied the Humanities for undergrad, and obtained a Master of Arts in business journalism from Columbia University. I love covering the people, and the passion, that animates innovation in America. Email me at andrea dot hayley at epochtimes.com
View profile
Follow
biggersmaller
Print
WASHINGTON—Everybody knows about the problem: Despite a threefold national increase in education spending over the last three decades, children are still failing to make the grade.

The United States has plummeted to 21st, 23rd, and 25th among 30 developed nations in science, reading, and math, respectively.

The cause of the decline, say education reformers, is an outmoded bureaucracy that protects the interests of adults—too many administrators doing too little, job guarantees that make it impossible to fire ineffective teachers, automatic pay increases pegged to seniority, and bloated entitlements—while students suffer.

“We have textbook manufacturers, teachers’ unions, and even food vendors that work hard to dictate and determine policy. … But there is no big organized interest group that defends and promotes the interests of children,” writes former Washington, D.C., School Chancellor Michelle Rhee, in a Newsweek editorial published Dec. 6, 2010.

The editorial ran as part of a coordinated launch that included an appearance on Oprah, who also endorsed Rhee’s organization, StudentsFirst. Its policy agenda is to reform education so students benefit. Rhee founded the group after resigning as chancellor of D.C. schools.

The organization’s first goal is to muster up clout by signing up 1 million members and raising $1 billion dollars in its first year.

Rhee says StudentsFirst is nonpartisan, but definitely political. She plans to endorse and support candidates for elected office and school boards that support her policy agenda, while lobbying for new legislation that supports her priorities.

In the past few weeks Rhee has testified before the Florida state Senate and House Kindergarten–12 Education committees, participated in a roundtable discussion with Moms Unite (a grassroots mom’s group based in Los Angeles, Calif.), spoken as a panelist at UCLA School of Law and appeared on the CBS daytime talk show, “The Talk.”

StudentsFirst claims that 100,000 new members signed up in the first three days after launching its website. As of this week, its Facebook membership sits at 36,088; Twitter, 4,681 followers; and over a hundred grassroots support groups, most of them comprising a single member, have been registered on the StudentsFirst website. Rhee has recently settled with her new husband, Sacramento Mayor Kevin Johnson, in California, which has the largest number of members at 291. A select few high-profile supporters are listed.

Oprah threw her weight behind Rhee on national television Dec. 6.

“Today I am using my show as a platform. This is an urgent call for action. … Somebody needs to fix it. You can do it. I am behind you. We are behind you,” said Oprah.

In fact, Rhee, a Democrat, has forged an unlikely alliance with conservative Republican governors who may see her reform agenda as a way to break teachers’ unions.

During her three-year tenure as D.C. schools chancellor, Rhee famously waged war with the local and national teacher’s federations, although for her own reasons. Hired by former D.C. Mayor Adrien Fenty and given an extraordinary level of decision-making power by him, Rhee wasted no time in making drastic changes to the system.

While Rhee consistently defends her actions on the basis of their benefiting students, her heavy-handed approach, “my way or the highway” attitude, and the sheer speed of the changes, made teachers’ unions both wary and insecure.