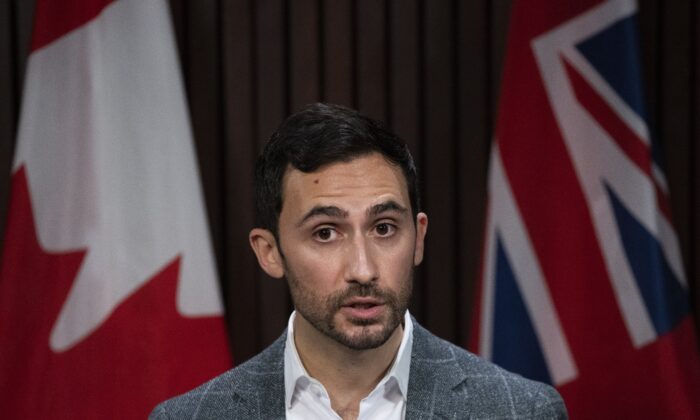 Stephen Lecce, Minister of Education for Ontario makes an announcement on preparations underway for the return to in-person learning during the COVID-19 pandemic in Toronto on Jan. 12, 2022. (The Canadian Press/Nathan Denette)
Viewpoints

Michael Zwaagstra: To Keep Kids in School, Ontario Politicians Must Back Up Their Words With Action

Ontario Education Minister Stephen Lecce is determined to keep students in school this year. The Ontario government recently released its “Plan to Catch Up,” which prioritizes full-time in-person learning for all students.

This is a good sign. Ontario students have missed far too much school over the last two years. Between the pre-pandemic labour disruptions and the repeated public health shutdowns, there is a lot of catching up to do. Students need to be in class.

However, the Ontario government’s record on the education file has, to date, been mediocre at best. Many of its grandiose promises of education reform have fallen flat over the last four years. To be blunt, there really isn’t much difference between Ontario schools today and Ontario schools in 2018.

It doesn’t help that school boards, particularly the Toronto District School Board and the Waterloo Region District School Board, are controlled by woke trustees who are more interested in pushing their progressive ideology than in helping students learn. Without clear and firm direction from the province, school board trustees and administrators are more than happy to make up their own rules.

It’s time for action, not just mere words. Specifically, the Ontario government must do three things if it is serious about keeping students in class.

First, Ontario needs to declare teachers an essential service and prohibit them from going on strike. Teacher strikes are profoundly harmful to student learning since they result in students losing valuable class time. With teacher collective agreements expiring at the end of August, there is a real threat of a strike happening sometime during the upcoming school year.

Declaring teachers an essential service would also send a clear message that keeping schools open is essential for both students and parents. Just as police officers and firefighters cannot walk off the job when talks break down, teachers should stay in the classroom throughout the entire bargaining process. Outstanding contract disputes could be settled through binding arbitration.

This already happens in Manitoba and Prince Edward Island, where teacher strikes have long been prohibited. Students and parents in these two provinces have the benefit of knowing that classes will not be disrupted during a labour dispute. As for concerns that this could lead to Ontario teachers being shortchanged, teachers in Manitoba and PEI receive similar salaries and benefits as those in the other eight provinces.

The second thing the Ontario government must do is publicly acknowledge that it was wrong to close schools down during the COVID-19 pandemic. While temporarily closing schools at the outset of the pandemic was understandable, there is no excuse for the extended school closures that followed. It is unacceptable that Ontario students missed more in-person learning days than students in any other province.

The problem is that the Ontario government listened to the voices of those who were unduly worried about COVID-19 while ignoring the experts who pointed out the serious harms of extended school closures.

Unless the Ontario government acknowledges that it was wrong to close schools in the first place, there’s no reason to believe they won’t shut down schools again when health officials raise concerns about the next COVID-19 variant.

In addition, keeping schools open means ensuring that they can operate normally. Imposing public health restrictions such as mask mandates and/or vaccination requirements would severely disrupt the learning environment.

Young people are the demographic group least impacted by COVID-19 and yet, in many ways, they have paid the heaviest price because of excessive public health restrictions.

Finally, the Ontario government needs to take control of rogue school boards. It must clearly state that trustees will not be allowed to proactively close schools out of fears about COVID-19. It’s important that this be made clear before the school year begins so that there is no confusion on this matter.

Simply put, the Ontario government must put trustees in their place. Trustees should focus on running schools effectively, not on shutting them down or imposing unnecessary restrictions on students.

Ontario students deserve a normal school year. Education Minister Stephen Lecce is right to insist that students be in school on a full-time basis. Now it is time for Lecce to back up his words with action.