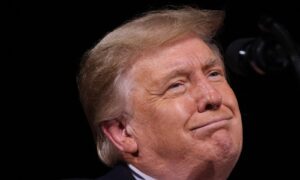 The throng of people who stormed the Capitol building on Jan. 6 during the joint session of Congress was led by Antifa and its agent provocateurs who guided Trump supporters into the Capitol building, Michael Yon, a war correspondent who has covered hundreds of protests, told The Epoch Times’ Crossroads program.

Yon was on the scene but did not go inside the Capitol. “I was outside the building, watching the activities out there,” he said.

There are different elements of Antifa, and the one seen at the Capitol was described by Yon as an “A-Team” of Antifa’s special forces used only to carry out special actions. This is a different element than the Antifa groups that were seen in riots in Portland or in the occupied zone there, he explained.

“They’re well trained, they’re well organized, they show up with the gear that they need. They’ve got the statements ready to say … They come out, they make great statements for the camera, sound bites. These guys are professionals,” Yon said about Antifa’s A-Team.

Antifa uses agent provocateurs with a typical tactic of showing up at a protest wearing their enemy’s clothing, waving their enemy’s flags, and doing things which are commonly called “false flag operations,” said Yon, who has deep insights into Antifa and their tactics.

Agent provocateurs may come to an already arranged protest and harness the energy of the gathering or they may also arrange a protest under the false flag of their enemy, Yon said. But in this case, Trump supporters had a real rally.

After President Donald Trump gave a speech at the Ellipse, his supporters marched over 30-45 minutes to get to the next rally at the Capitol building. At that time, Yon started seeing some people guiding the crowd. Those people who were saying “come forward, keep coming … go over the wall,” were agent provocateurs (APs), Yon said.

The APs had taken down the bike rack barriers set up for the rally attendees at the Capitol and used those to make ladders to help protesters go over the wall, Yon said. He saw APs waving huge Trump flags and saying: “This is your job. This is your chance. Stand up for your country.”

“He who has the microphone has the power,” Yon said. “Once people get riled up, they’ll do it. Because we’re humans and we will go with the herd,” he added.

He also saw on an Epoch Times video “a guy with a Trump sticker on the back of his helmet starting to break the window with a truncheon” while another person who appeared “to be a Trump supporter comes to bear hug him and grab him back.”

On that day, he observed that when instigators were leading protesters into action and breaking down doors, many Trump supporters were saying “don’t break anything, don’t steal anything.”

The Epoch Times has many videos showing how Trump supporters tried to stop the destruction or breaking things during the Jan. 6 protest.

One of the Antifa tactics is changing clothes on the scene to make it more difficult to track them, Yon said. They can go to the action in one set of clothes, change later, and emerge as a different person.

Yon saw in Hong Kong protesters often changing their clothes under umbrellas. There were no umbrellas in the Jan. 6 protest, but Yon saw one individual changing clothes under a flag. “That’s a common Hong Kong tactic, to bring a change of clothes in your backpack” or to wear two sets of clothes, and take one off during the action, Yon explained.

However, they rarely change shoes. They usually have the same shoes which can be used as identifying markers for the members of the same Antifa cell.

Antifa learned this tactic from Hong Kong protesters and even bragged that “they brought a lot of the tactics back from Hong Kong to the United States,” explained Yon, who spent about seven months in Hong Kong during the pro-democracy protests and was in about 100 major protests and many smaller ones.

“Of course, these two movements are completely separate. They’re completely unrelated,” he added. Antifa is an extremist anarchist-communist group, while Hongkongers protested to defend their freedom from the Chinese Communist regime’s attempts to limit Hong Kong’s autonomy guaranteed by the “one country, two systems” principle.

The Hong Kong protesters’ resistance had the moral high ground, they did not steal or break people’s shops, Yon said adding that “Antifa is the opposite. They’re clearly criminal elements.”