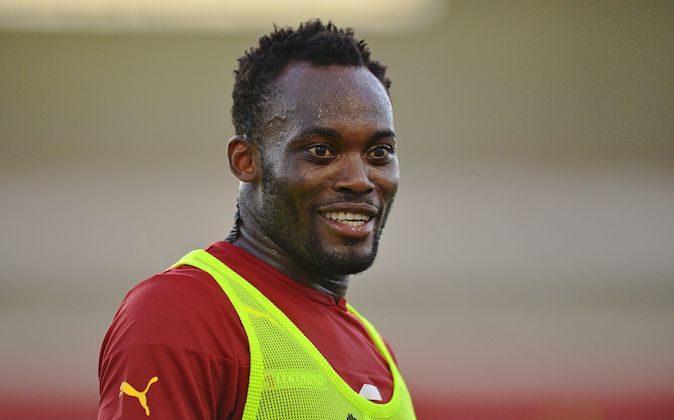 Ghana's midfielder Michael Essien takes part in a training session at the Rei Pele stadium in Maceio, on June 13, 2014. Ghana will face the USA in their first match of the 2014 FIFA football World Cup in Natal on June 16, 2014. (CARL DE SOUZA/AFP/Getty Images)
Sports

Ghana and AC Milan midfielder is married to Akosua Puni.

The couple were married in 2013 an undisclosed location in London.

Essien was previously with actress Nadia Buari, but the couple fell out rather publicly in 2013.

Essien and Puni are rumored to have three children.

Check out an AP article on Ghana’s World Cup rematch against the U.S.

Ghana Ready for World Cup Rematch Against US

MIAMI (AP) — In its final exhibition before facing the United States in the World Cup, Ghana practiced celebrating.

Captain Asamoah Gyan scored a breakaway goal against South Korea and then launched into the azonto, a two-step dance popular in Ghana. Soon he was joined in the corner of the field by a cluster of teammates, their hands, hips and feet moving in impressive synchronicity.

Past World Cup matches against the United States have given Ghana plenty to celebrate. The rivalry will be renewed Monday in Brazil, and the Black Stars want to be ready.

“The United States are a very, very good team,” coach James Appiah said. “It’s not going to be easy. We have to make sure our players are playing their roles well. We hope to give them a very good game.”

The Ghanaians have every reason to be optimistic, because they eliminated the United States from the past two World Cups. So they’ll have the azonto cued up, and other dances ready as well.

“We’ve got different styles — three or four,” Appiah said with a smile. “The players have to decide which one they want to use, but we hope to showcase one of them during the World Cup.”

Ghana defeated the United States in group play in 2006, and in the round of 16 in 2010. A 4-0 victory against South Korea in Miami on Monday suggested Ghana will again be a handful.

“Bring them on, bring them on — the United States,” a reporter from Ghana shouted with a grin in the press box at halftime of the exhibition. “America, we are coming.”

The victory over the U.S. team four years ago sent Ghana into the World Cup quarterfinals for the first time. Ghana was embraced as “Africa’s Team” in the first World Cup on the continent and came within inches of becoming the first African squad to reach the semifinals, but lost to Uruguay in a shootout after Gyan hit the crossbar on a late penalty kick that would have won the game.

FIFA rankings suggest Ghana is the underdog in talent-laden Group G, which also includes the No. 13-ranked United States, No. 2 Germany and No. 4 Portugal. But no one is likely to take the Black Stars lightly.

“They are a very good team, young, very good mentality,” former U.S. national team coach Bora Milutinovic said after watching Ghana beat South Korea. “It will be a big challenge for all teams in this group. Everybody is very strong. It is like a small World Cup between four teams.”

There’s been some turnover on the Black Stars’ roster since they last faced the United States. Only six starters from the game against the Americans in 2010 are on this year’s squad, which includes 16 World Cup newcomers. Ghana is the youngest team in the tournament with an average age of 25 years, 6 months.

Ghana may be without striker Majeed Waris, who hurt his left thigh early in Monday’s friendly. An MRI exam revealed a tear.

The team doctor said Tuesday he hopes Waris can return “pretty soon,” but added the striker might be left off the roster, which must be submitted by Sunday.

The squad will include Gyan and midfielder Sulley Muntari, both playing in their third World Cup, and star midfielder Michael Essien of AC Milan. Defender Jonathan Mensah and forward Kevin-Prince Boateng are also World Cup veterans.

When asked after the match to select two players likely to emerge as stars in Brazil, Appiah demurred.

“It’s really difficult to pick two of my players who I think can make an impact in the World Cup,” he said. “I’ll choose 11 for you.”