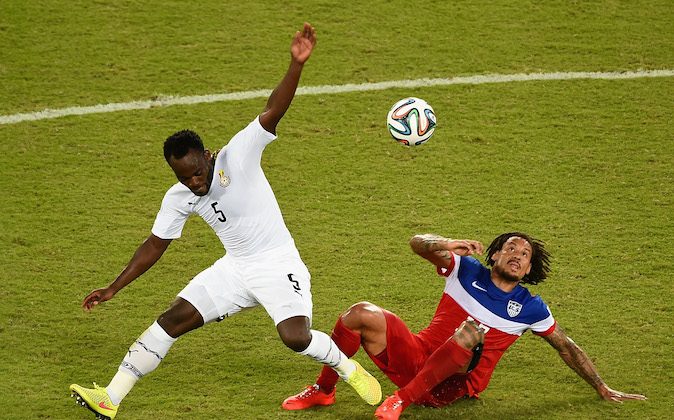 Michael Essien of Ghana is challenged by Jermaine Jones of the United States during the 2014 FIFA World Cup Brazil Group G match between Ghana and the United States at Estadio das Dunas on June 16, 2014 in Natal, Brazil. (Photo by Laurence Griffiths/Getty Images)
Soccer

Ghana’s Michael Essien could return against Germany on Saturday.

The AC Milan midfielder returned to training on Thursday, after missing out on a Wednesday session.

Essien had injured his toe during his side’s 2-1 lost to the United States last week.

Coach Kwesi Appiah was questioned for his decision to start with Essien and forward Kevin-Prince Boateng on the bench against the USA.

With tough games against Germany and Portugal, Essien’s recovery will come as a much needed boost for Ghana, who needs good results to get into the tournament’s round of 16.

Here is an Associated Press article on the Ghana team.

FORTALEZA, Brazil (AP) — After losing the first match, two subjects are off limits for Ghana: An early exit from the World Cup, and family.

Ghana striker Kevin Prince Boateng could play against his half-brother Jerome on Saturday, when the ambitious Africans take on Group G favorite Germany in Fortaleza.

The Boatengs already met in their last World Cup four years ago when Germany won 1-0, and have played against each other in the Bundesliga.

The 24-year-old winger plays with his younger brother Jordan in the Ghana squad, and their father was football great Abedi Pele, who was once a national teammate of the current coach James Appiah.

The coach and Andre Ayew insisted family had little significance in the game against Germany, which started the tournament with a 4-0 thrashing of Portugal.

“Tomorrow it’s not about the Ayew bothers or the Boateng brothers. It’s Ghana versus Germany, and what’s important is that we have a good game,” Ayew said. “What I can tell you is that, tomorrow we are going to die for our nation and do everything make our people proud.”

When pressed at a news conference, he added, laughing: “I’m not here to talk about my dad. I think it’s something in the genes. God has given us the opportunity to be a football family.”

Ghana, playing in its third consecutive World Cup, had started with the goal of reaching the semifinals, but its 2-1 opening loss to the United States and a string of injuries have left the Black Stars fighting to avoid an early group exit.

“It’s the coach’s job to absorb pressure, otherwise there’s no point in doing the job,” Appiah said. “My ambition tomorrow is to go for a win. I’m not a guy who thinks about getting a draw.”

The Boateng brothers were kept away from reporters at training sessions by Germany and Ghana at Fortaleza’s Castelao Stadium.

When asked about the potential matchup, German coach Joachim Loew was eager to move on to another subject.

“It’s a side issue not something we discuss,” he said “I think Ghana’s Boateng will start for them. We know his qualities. But as far as brothers playing against each other, I’d rather not talk about it.”