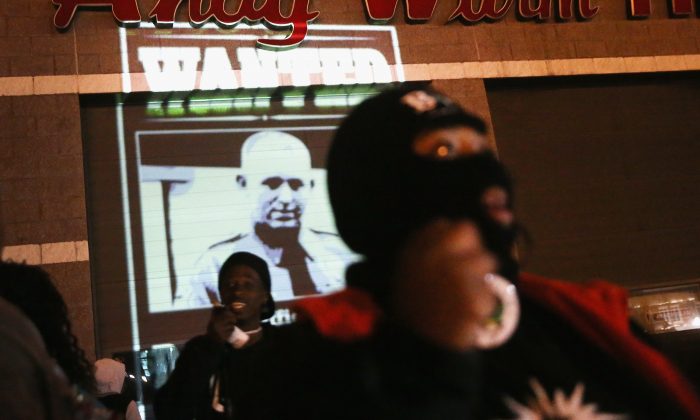 Demonstrators project a wanted poster with a picture of Police Officer Darren Wilson on a wall near the pollice station as protests continue in the wake of 18-year-old Michael Brown's death on October 22, 2014 in Ferguson, Missouri. (Photo by Scott Olson/Getty Images)
US

A militant group is offering $5,000 for details on the whereabouts of Darren Wilson, the Ferguson police officer who shot Michael Brown dead.

A grand jury is currently deciding whether Wilson is guilty of any wrongdoing in the shooting. A date for the decision has not been pegged as of yet.

Now a militant group that calls itself the RbG Black Rebels says that it’s offering a reward for information that leads them to Wilson, saying that they’re serious.

“We are paying $5k cash for location of Ofc. Darren Wilson. Real $, no joke, no crime we just wana get his photo an ask him a few questions,” it said.

The account insisted that the group did not issue a bounty.

“If we had a ‘Bounty on his Head’ we wld’nt post that. We just wana get photos&statement from Ofc. Wilson,” it said. “He is still a paid city employee.”

“We’re not here to make threats so dnt threaten us. Especially if you’re local n we can find out who/whr u are,” it added.

The group calls itself “the Militant Resistance against this corrupt police state, that includes the national guard.”

It said that it’s been “stocking up” and encouraged Twitter users to tweet the location of any National Guard personnel or police officers that are spotted around the city.

“All the Hoods & #RbG Groups around the country are waiting & watching to see how we handle this situation, Trust me we wont let yall down.”

“If any store owner in Ferg/Stl shoots or harms any protesters i promise your store will never open again. This is not a threat its a promise,” it said in another post.

“I don’t promote looting or burning down their store but [expletive] Sam’s market on W. Flo,” it said in yet another post.

See an Associated Press story on the next page and links to related stories below.