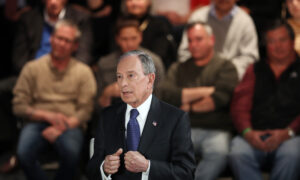 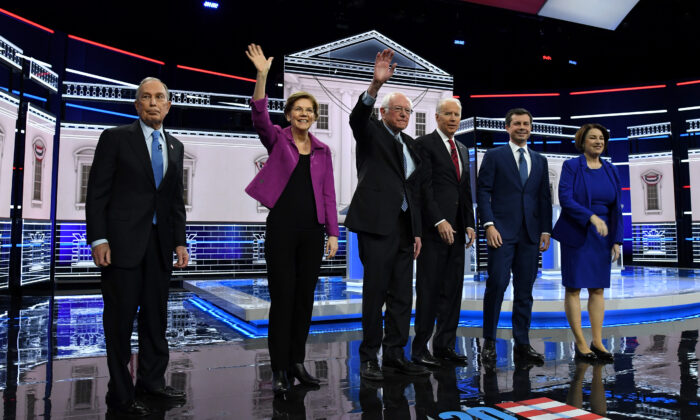 A spokesperson for Bloomberg told his namesake media, Bloomberg News, on Sept. 13 that the money will be spent on voter-turnout initiatives and communicating with Hispanic voters.

“Mike Bloomberg is committed to helping defeat Trump, and that is going to happen in the battleground states,” Kevin Sheekey, senior Bloomberg adviser, said on Sept. 13.

The move drew a rebuke from Trump on Sept. 13. “I thought Mini Mike was through with Democrat politics after spending almost 2 Billion Dollars, and then giving the worst and most inept Debate Performance in the history of Presidential Politics,” he wrote on Twitter.

Bloomberg, the former three-term mayor of New York City, spent hundreds of millions of dollars of his own money on running for president earlier this year. He eventually bowed out of the race and endorsed Biden.

Earlier this year, Warren criticized Bloomberg’s leadership and comments that he had made about women at his company.

“I’d like to talk about who we’re running against,” she said about the media mogul. “A billionaire who calls women ‘fat broads’ and ‘horse-faced lesbians.’ And no, I’m not talking about Donald Trump. I’m talking about Mayor Bloomberg.”

Trump on Sept. 13 later questioned how Bloomberg, 78, made his massive fortune. Bloomberg started his financial company, Bloomberg LP, in the early 1980s before it expanded to Bloomberg News and Bloomberg TV.

“In the highly competitive world of high tech, how come nobody has ever challenged Mini Mike Bloomberg and his very average, & supposedly outdated, ‘stuff’ that he sells to so many?” Trump wrote on Twitter. “Did he use his position as Mayor of New York to create what is now a monopoly? Just askin’?”

Bloomberg’s announcement to provide funds to reelect Biden came after the Cook Political Report declared that Florida is now a “toss-up” after labeling it as “leans Democrat.”

“A more competitive Florida contest is good news for Pres. Trump, who can’t afford to lose this state,” Cook’s national editor, Amy Walter, wrote. “Even so, many Democrats never expected Biden to be able to win here, having long written off the Sunshine State as a loser.”

Biden’s campaign didn’t immediately respond to a request for comment.