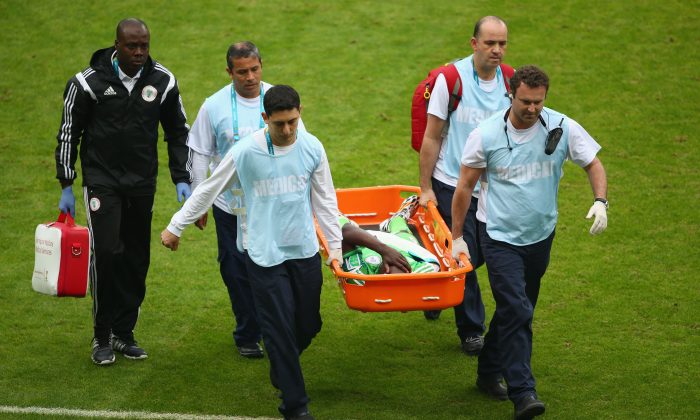 Michael Babatunde of Nigeria is stretchered off the field with his right arm wrapped during the 2014 FIFA World Cup Brazil Group F match between Nigeria and Argentina at Estadio Beira-Rio on June 25, 2014 in Porto Alegre, Brazil. (Photo by Quinn Rooney/Getty Images)
Soccer

Nigeria’s Michael Babatunde might have broken his arm against Argentina on Wednesday.

The unfortunate injury was inflicted by a fellow Nigerian team mate, Ogenyi Onazi.

Babatunde was in the line of Onazi’s shot on goal, and the ball struck his wrist.

It is uncertain how badly Babatunde was hurt, although TV commentators suggested that his arm was broken.

Check out an Associated Press article on the match.

Argentina won Group F while Nigeria also advanced despite the loss, becoming the first African team in the round of 16 in Brazil.

Messi opened the scoring in the third minute, slamming in the rebound after Angel Di Maria’s shot bounced off the post. Nigeria replied within a minute as Musa cut in from the left and beat Sergio Romero with a curling shot toward the far post.

Messi’s perfectly hooked free kick restored the lead for Argentina just before halftime. The Argentina captain has scored in each of the team’s three matches, and now has a total of four goals.

The second half started at the same furious pace as the first, with two goals within the first five minutes. First Musa took advantage of confusion in the Argentine defense to score his second. Then Rojo made it 3-2 as he got his right knee on a corner kick three minutes.

Both teams continued to chase more goals but the intensity dropped off somewhat as Argentina coach Alejandro Sabella substituted Messi after the hour-mark.

Tens of thousands of Argentine fans had traveled to Porto Alegre for the match, taunting Brazilian spectators by singing “Maradona is greater than Pele” at the 44,000-capacity Beira-Rio Stadium.

The Brazilians booed and held up five fingers to remind the Argentines of how many World Cups they’ve won. Argentina has two.

Meanwhile, tragedy struck in Nigeria before the match, as an explosion rocked a shopping mall in the capital, Abuja, and police said at least 21 people were killed.

The blast came as Nigerians were preparing to watch the World Cup match. Many shops at the mall have TV screens but it was unclear if the explosion was timed to coincide with the match, which started an hour later.