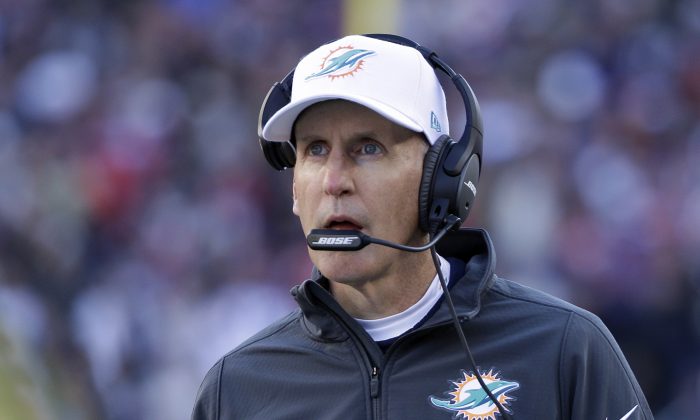 The Miami Dolphins’ season is on life-support, and there’s been rumors that coach Joe Philbin will be out next season after Sunday’s loss to the Patriots. The Dolphins play the Minnesota Vikings next week, and here’s some of the latest updates:

The Miami Herald reported that Ross was spotted having conversations with Marino and ex-Jets General Manager Mike Tannenbaum.

Marino said he was never asked to evaluate coach Joe Philbin but said he’s a special advisor to the owner. Tannenbaum serves as a “consultant” to the team.

As the Herald notes:

After Miami’s disappointment on Sunday, Ross was seen talking intently with both Marino and Tannenbaum. And although the entirety of the conversation could not be properly picked up, it is clear the men were discussing, at least in part, the Dolphins situation and future.

The scene was not typical of what happens after a game.

Afterward, Tannenbaum was seen at Ross’s helicopter — again, not a usual occurrence. Tannenbaum got on the copter and flew back to the New York area with Ross. The Dolphins say Marino did not get on the helicopter but instead went back with the team on the team charter.

Coach Joe Philbin probably is going to be fired after this season’s over.

A team source told the Orlando Sun-Sentinel that Ross is “on the verge” of ending Philbin’s tenure when the season ends.

As the Herald says, “9-7 is a disappointment for these Dolphins because they just had huge games against Baltimore at home and New England on this big stage and laid an egg in both games on consecutive weeks with playoff implications hanging in the balance.”

“So after two gigantic failures in important, meaningful games, everyone is supposed to be thrilled and coach Joe Philbin gets a pat on the back for winning two meaningless games to finish the year?” it said, adding that it’s “hard to fathom” Philbin coming back.

Coach Philbin, however, wouldn’t discuss his future after the New England loss.

“What my focus is and the team, staff is this week,” Philbin told ESPN. “This is Game 15. This is the 2014 season. What happened in the past, certainly at some point in time, is relevant. But right now what’s relevant is getting our team to play up to their potential for 60 minutes against the Minnesota Vikings. That’s really all that’s important to me right now.”

“They just beat us on the football field,” Pouncey said. “The coaches don’t do anything. There are guys out there; it’s 11-on-11. The coaches have nothing to do with it.”

Wallace added: “Coach Philbin is our coach and we’re rocking with him no matter what. So we got a lot of things to deal with in the next two weeks. We got to stick together.”