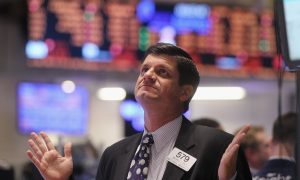 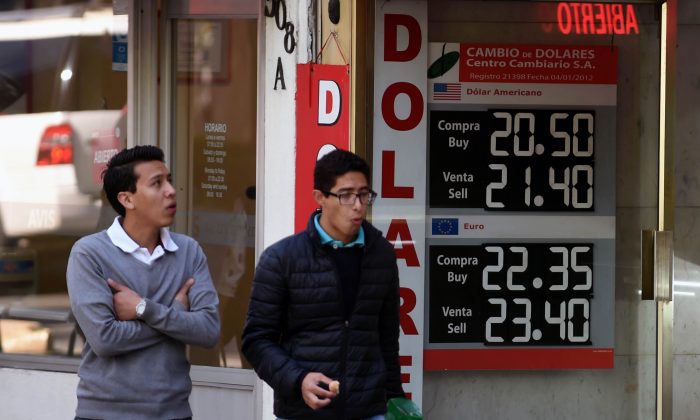 A currency board shows the US dollar exchange rate at a bureau de change in Mexico City on Jan. 11, (ALFREDO ESTRELLA/AFP/Getty Images)
Americas

MEXICO CITY—Mexico’s main stock index closed out its worst quarter in over 17 years on Dec. 31, dragged down by doubts about how the new leftist government will manage the economy as well as concerns over global growth and trade.

The S&P/BMV IPC stock index lost 15.89 percent in the fourth quarter, its steepest drop for a three-month period since the third quarter of 2001, when the Sept. 11 terrorist attacks hit the United States.

That quarter the market fell by nearly 19 percent.

Before taking office earlier this month, President Andres Manuel Lopez Obrador rattled financial markets when on Oct. 29 he said he would scrap a partly built $13 billion new Mexico City airport on the basis of a straw poll that was widely criticized.

The decision kicked off a dispute with some bondholders of debt issued to finance the airport and raised fears Lopez Obrador could pursue an agenda characterized by arbitrary decision-making and frequent use of referendums.

Market sentiment was also hammered by a bill drafted by Lopez Obrador’s National Regeneration Movement to limit bank fees and another to regulate the mining sector.

“Those decisions were not well received and the unease has persisted among investors,” said James Salazar, economist at CI Banco.

During the global financial crisis in the third quarter of 2008, the Mexican bourse fell 15.3 percent.

Global markets have been depressed this year by the U.S. trade dispute with China, uncertainty surrounding Britain’s planned departure from the European Union, and more recently the U.S. federal government shutdown.

Still, the index has steadied in the last few weeks, having fallen well below the 40,000 level in late November.

The market will likely continue to move “laterally” during the first half of 2019 until it becomes clearer how Lopez Obrador is managing public finances, said Jorge Placido, an analyst at brokerage Vector Casa de Bolsa.

“Investors are willing to pay and stick around until there is more clarity about the economy,” said Placido.