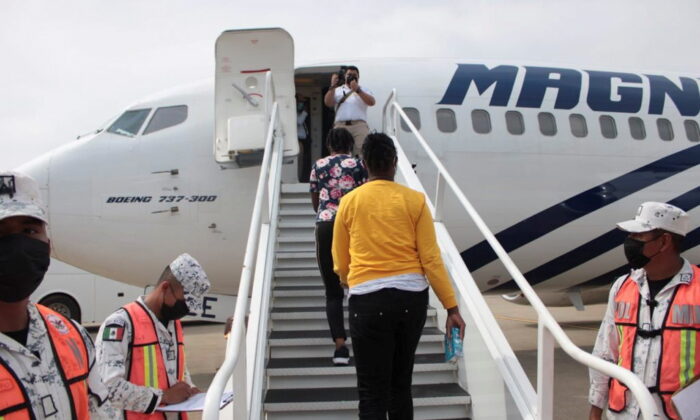 Haitian migrants board a plane as part of the "assisted voluntary return" to Haiti by Mexican authorities, at the Carlos Rovirosa Perez International airport, in Villahermosa, Mexico, on Sept. 29, 2021. (Mexico's National Migration Institute/Reuters)
International

MEXICO CITY—Mexico’s government sent 70 Haitian migrants back to Haiti on Wednesday in what it described as a “voluntary return” flight, days after the United States cleared thousands of Haitian illegal immigrants from a camp at the Mexican border in Del Rio, Texas.

Mexico’s interior and foreign ministries said in a joint statement that the “first group” of migrants— including 13 children—were flown to Port-au-Prince as part of an agreement between Mexican and Haitian authorities to manage a jump in Haitian migrants moving through Mexico to the U.S. border.

Nearly 30,000 illegal immigrants were encountered over a two-week period this month in Del Rio, where they had been living in a sprawling, makeshift encampment.

The United States had sent some 4,000 of those people back to Haiti as of Monday, according to the Department of Homeland Security (DHS).

An estimated 8,000 migrants returned to Mexico, where officials have urged them to follow through with asylum applications in southern Mexico.

The 70 migrants on Wednesday’s flight had been in Mexico City and the states of Hidalgo, Tabasco and the State of Mexico, the government statement said.