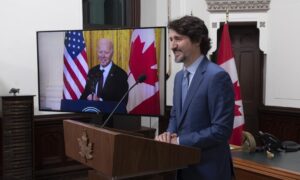 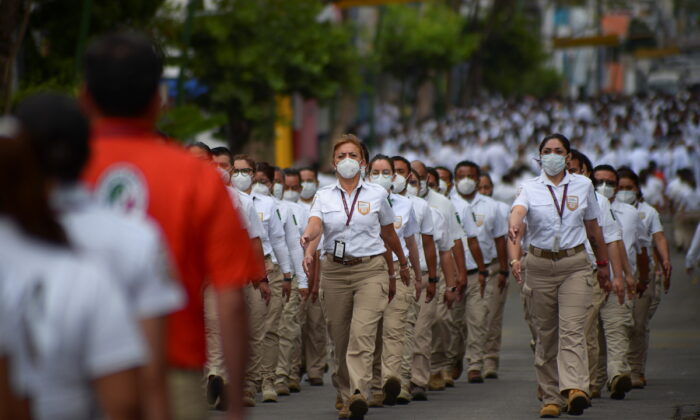 Agents of the National Migration Institute (INM) march during the announcement of the new measures by the Mexican government to deter illegal crossings at the southern border with Guatemala, in Tuxtla Gutierrez, Mexico on March 19, 2021. (Jacob Garcia/REUTERS)
Americas

Mexico Rolls Out Steps to Tighten Southern Border With Guatemala

The announcement comes after Reuters reported that Mexico was planning to beef up border enforcement along its southern reaches to stem a sharp increase in illegal immigrants entering the country to head for the United States.

Many illegal immigrants entering Mexico hope they will be allowed entry into the United States under U.S. President Joe Biden’s “humane” immigration policies, thanks to misinformation from criminal gangs that make money off desperate immigrants looking for better opportunities.

High levels of violence and poverty in a trio of Central American countries and advertising by the gangs continue to see thousands of illegal immigrants take large loans and embark on the dangerous journey north in the hopes of seeking a better life.

Members of the National Guard march during the announcement of the new measures by the Mexican government to deter illegal crossings at the southern border with Guatemala, in Tuxtla Gutierrez, Mexico on March 19, 2021. (Jacob Garcia/REUTERS)The INM said the measures were aimed at protecting the rights of children from Central America who were being used by criminal gangs as a means of attempting passage into the United States.

Since March 1, the INM said it has registered 4,180 children and teenagers traveling without authorization through Mexico, some with older family members, and some unaccompanied.

The INM said the criminal gangs are telling people to take children along, saying it will make it easier to enter the United States.

The tighter measures at Mexico’s border with Guatemala, which also ban non-essential crossings such as tourism, will be in place for a month with the potential to be renewed.