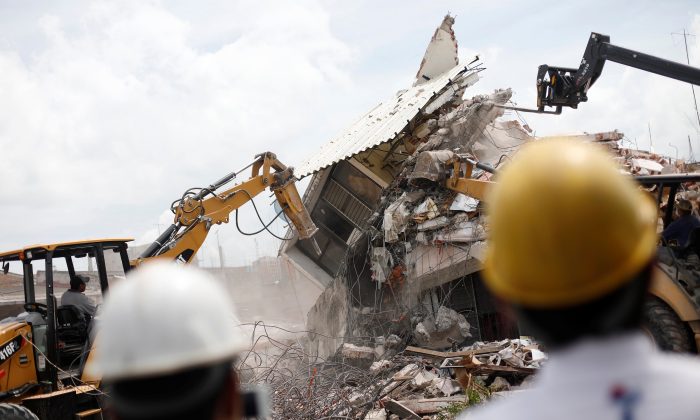 Demolition machines tear down a house damaged by an earthquake in Jojutla de Juarez, Mexico on Sept. 21, 2017. (REUTERS/Edgard Garrido)
Americas

MEXICO CITY—Rescuers swarmed over rubble with shovels and picks on Thursday in a torturous search for survivors two days after Mexico’s deadliest earthquake in a generation, while politicians sought to outdo each other in donating party funds to help victims.

As the arduous search through mountains of debris continued, signs of exhaustion crept in following Tuesday’s 7.1 magnitude quake that killed at least 282 people, with growing discontent and rumors swirling online.

Mexico’s Navy apologized for communicating incorrect information in a story that captivated the nation of a fictitious schoolgirl, supposedly trapped under a collapsed school in Mexico City and dubbed Frida Sofia by local media. The high-profile televised blunder led to an outpouring of anger.

Officials also sought to quash rumors that the military would be bulldozing razed buildings deemed unlikely to harbor survivors.

“We won’t suspend the search and rescue mission we’ve been given until we find the last of the survivors,” army chief Salvador Cienfuegos said on Twitter.

In hard-hit Mexico City, rescue efforts focused on 10 collapsed buildings where people may still be alive. Some 52 buildings collapsed in the capital alone, with more in the surrounding states. Mexico City Mayor Miguel Angel Mancera said 50 people were missing.

Working without pause since the massive quake, first responders and volunteers have saved 60 survivors from central Mexico City to poor neighborhoods far to the south.

Luis Manuel Carrillo Nunez, 14, said he was in a yoga class at the Enrique Rebsamen private school on Tuesday when he heard people yell, “It’s shaking!”

He ran to escape the building as it began collapsing. But some classmates never made it out.

“It’s hard to know that you’re not going to see again the friends that you loved. I’m really traumatized,” he said.

The full scale of damage has not been calculated, with buildings across the city of 20 million people badly cracked.

Citigroup’s Mexican unit Citibanamex told clients it was lowering its 2017 economic growth forecast to 1.9 percent from 2.0 percent due to the earthquake.

The quake became more politicized on Thursday, with the country’s deeply unpopular parties engaging in a game of one-upmanship to donate ever-higher percentages of their federal funds to help those afflicted.

Disaster relief is sensitive for politicians in Mexico after the government’s widely panned response to the 1985 quake caused upheaval, which some credited with weakening the one-party rule of the Institutional Revolutionary Party (PRI).

In a statement, the PRI said it would be donating 258 million pesos ($14.42 million), or 25 percent of its annual federal funding, to help those afflicted.

Calls for political penny-pinching gained momentum on social media following a powerful quake two weeks ago that killed nearly 100 people in the south of the country.

On Thursday, though, after news of the PRI plans broke, Lopez Obrador upped the ante, proposing donating 50 percent of his National Regeneration Movement (MORENA) party’s 2018 federal funding to support victims.

Lorenzo Cordova, the head of the national electoral institute, said in a video posted to Twitter the body had no problem with parties choosing to divert funds to the needy.

Anger At Navy and Media

After more than a day of wall-to-wall television coverage of the search for a girl in the rubble of the Enrique Rebsamen school, the Navy changed its version of events and said all pupils were now accounted for.

Since Wednesday, the Navy said a schoolgirl was trapped in the rubble, prompting 30-hours of live coverage on top broadcaster Televisa of the rescue effort.

The search for “Frida Sofia,” captured hearts in a nation desperate for good news. As it became apparent no child was trapped, there was an outpouring of anger on social media directed at broadcaster Televisa and the Navy for raising hopes.

At one point a senior Navy official said he had no idea where the story of the girl had come from, but he later emitted a rare military apology accepting the Navy had been the source of the information, based, he said, on rescuers’ reports.

Eleven children were rescued from the rubble of the school, where students are aged roughly 6 to 15, the Navy said, adding that 19 children and six adults there were killed.

The body of a woman was pulled out on Thursday morning.

The Taiwanese Ministry of Foreign Affairs confirmed five nationals were trapped in a collapsed clothing factory in the Obrera neighborhood. Volunteers cutting through debris at the factory, which had been combed by rescue dogs, heard signs of life from a car.

Rescue worker Amaury Perez said, “We shouted, ‘If you are inside the vehicle, please knock three times.’ He knocked three times.”