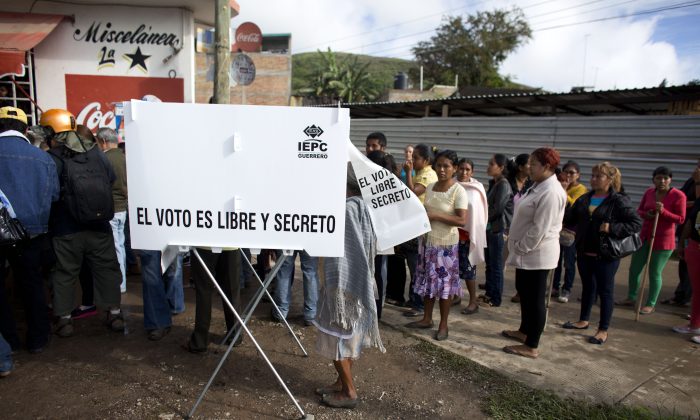 A town resident completes her election ballot, behind a screen reading in Spanish "Voting is free and secret," at a polling station defended by scores of residents, in Tixtla, Guerrero State, Mexico, Sunday, June 7, 2015. (AP Photo/Rebecca Blackwell)
Americas

Such midterm elections, this time for 500 seats in the lower house of Congress, nine of 31 governorships and hundreds of mayors and local officials, usually draw light turnout.

But attention was unusually high this time as a loose coalition of radical teachers’ unions and activists vowed to block the vote.

They have attacked the offices of political parties in Chiapas and Guerrero states and burned ballots in Oaxaca ahead of the vote. Those states, along with Michoacan, were expected to be the focus of unrest Sunday.

The teachers’ demands include huge wage hikes, an end to teacher testing and the safe return of 42 missing students from a radical teachers’ college. Those students disappeared in September, and prosecutors say they were killed and incinerated by a drug gang. One student’s remains were identified by DNA testing.

Protesters burned at least seven ballot boxes and election materials in Tixtla, the Guerrero state town where the teachers’ college is located.

“We want the children to be found first, and then there can be elections,” said Martina de la Cruz, the mother of one of the missing students.

Soon after, there was an exchange of rock-throwing between protesters and hundreds of people who said they intended to defend their right to vote. There were no immediate reports of injuries.

Presidential spokesman Eduardo Sanchez said Saturday that troops and police were deployed because “Mexicans have the right to vote in peace.” He said the government “will take all necessary measures within the framework of legality” to protect the elections.

Most of the nine governors’ races were too close to call, and in at least one race — for the governorship of the northern border state of Nuevo Leon — an independent candidate was a top contender, all of which is novel for Mexico.

“There is an enormous amount of competition, and that is good news,” said Luis Carlos Ugalde, formerly the country’s top electoral official.

The vote comes amid widespread discontent with politicians in Mexico, where a series of corruption scandals, a lackluster economy and human rights concerns related to the missing students and suspected army massacres have tarnished Pena Nieto’s image and fed anti-government protests.

Among the most volatile states is Guerrero, where at least 10 people died in a clash between community self-policing groups Saturday, but it did not appear to be linked to the election.

Mexico needs “a complete change in the economic question, in jobs, in security,” said Juan Altamirano, a 52-year-old resident of Mexico City, who said he supports two leftist opposition parties. “Things are going badly. We have been moving backward.”

Some cast blank ballots as a protest against a political class they consider corrupt and ineffective.

“What bothers me the most is that they think we’re stupid,” said Josue Mendoza, a 40-year-old graphic designer in the capital. He said he considered arguments that throwing away votes does not lead to change, but ultimately concluded that “there is no real option” on the ballot.

On a national level, Pena’s Nieto’s Institutional Revolutionary Party is seeking to preserve its commanding position in Congress, despite the president’s diminished popularity.

Violence ahead of the elections has already claimed the lives of three candidates, one would-be candidate and at least a dozen campaign workers or activists.

Candidates have been assassinated in the past, but the widespread threat to block elections is a new phenomenon.

Ugalde saw another threat in the possibility of postelection legal challenges, in part because new electoral laws highly regulate campaign funding, advertising and spending, and make violations a potential cause for overturning results.

“These may be the elections with the most post-electoral conflicts in Mexico’s history,” Ugalde said.