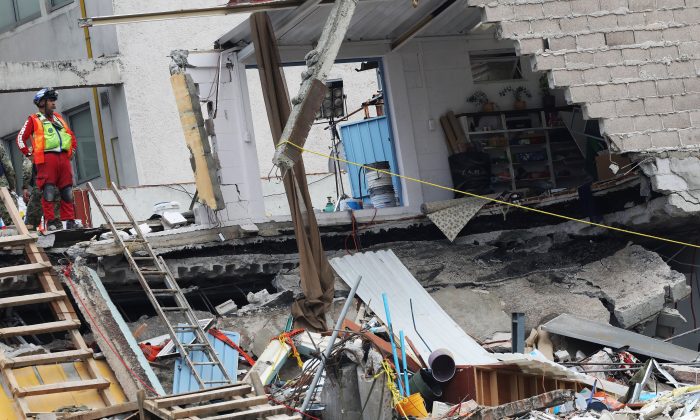 A member of rescue team looks on, in the rubble of a collapsed building, after an earthquake in Mexico City, Mexico on Sept. 25, 2017. (REUTERS/Nacho Doce)
Americas

Mexico in Three-Day Countdown to Search for Earthquake Survivors

MEXICO CITY—Rescuers are unlikely to find any more survivors of Mexico’s earthquake still buried in the ruins and will cease operations to find them at the end of Thursday, the emergency services chief said.

Tuesday marks one week since the 7.1 magnitude quake struck around lunchtime, killing 326 people, damaging 11,000 homes, and leading to a outpouring of civilian volunteers to aid and comfort the victims.

Luis Felipe Puente, coordinator of Mexico’s Civil Protection agency, told Reuters that rescuers would continue working at four sites but that they would hand-pick through the debris until Thursday.

“I can say that at this time it would be unlikely to find someone alive,” Puente said, considering that specially-trained dogs have yet to pick up the scent of survivors.

Forty-three people were still missing, including 40 who may have been trapped beneath a collapsed office building in the Roma district of Mexico City, Puente said. One person was believed missing at each of three other sites in the capital.

Asked how much longer search and rescue operations would continue, the official responded, “As of today (Monday), we have agreed to another 72 hours.”

The week began with signs that Mexico was resuming its routine as the streets filled with traffic and more than 44,000 schools in six states reopened.

But in the capital city, only 103 of the more than 8,000 public and private schools resumed classes.

The quake, coming exactly 32 years after a 1985 earthquake killed some 10,000 people, delivered a massive psychological blow that specialists say will take time to overcome.

“The children are in crisis and don’t want to talk. Some kids didn’t even remember their own names,” said Enriqueta Ortuno, 57, a psychotherapist who has been working with victims in the hard-hit Xochimilco district.

Much of the nation’s attention was focused on a fallen school in Mexico City where 19 children and seven adults died.

That school was one of many buildings that prosecutors will investigate, Puente said. Roughly 10 percent of damaged buildings were constructed after strict building codes were enacted in the wake of the 1985 earthquake.

“The Mexico City mayor and the national government have already ordered judicial investigations to determine who was responsible for new construction that did not meet the requirements,” Puente said from Civil Protection headquarters, where a roomful of technicians monitored seismic activity and tropical storms on an array of screens.

In Mexico City, 187 people died in 38 buildings that collapsed.

Rescuers pulled 69 people from quake-damaged properties, of whom 37 were still in the hospital as of Monday, 11 of them in grave condition, Puente said.

Demolitions of buildings that are beyond repair could begin as soon as Tuesday, he said.

Responders from 18 countries came to Mexico to help, but with the search for survivors down to four sites most of them had gone home, with Americans and Israelis among the few to remain, Puente said.

International aid was now focused on humanitarian needs, he said, with China providing large numbers of beds, tents and kitchen and bathroom fixtures for temporary shelters for the homeless.

But the biggest contributions came from Mexicans themselves, who responded with so much food, supplies and volunteer work that officials had difficulty moving largesse from wealthy and accessible neighborhoods to the most needy.

Puente recognized some “deficiencies” in coordinating relief efforts, but overall, he said, “The government today is an international benchmark.”