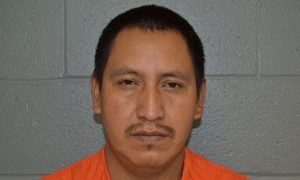 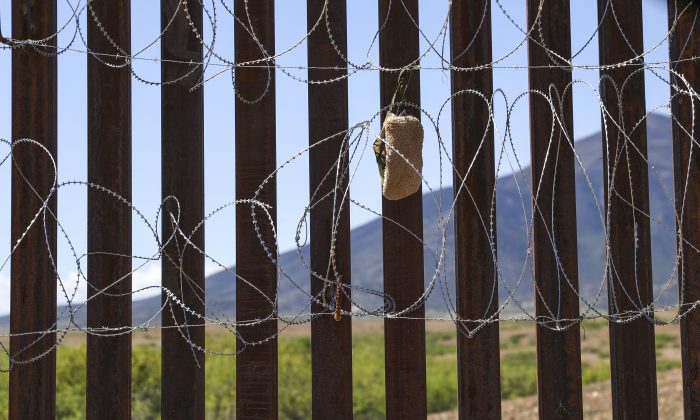 A carpet shoe, usually worn by smugglers and illegal aliens, is caught in the concertina wire on the U.S.-Mexico border fence near Sierra Vista, Ariz., on May 8, 2019. (Charlotte Cuthbertson/The Epoch Times)
Americas

Mexico’s government said it detained almost 800 illegal immigrants who were crammed in four trucks in eastern Mexico on June 15, one of the highest numbers detained by the country in recent months, following promises to step up efforts to curb illegal immigration.

In a statement, Mexico’s National Migration Institute said it detained 791 illegal immigrants who were discovered in trucks that were stopped in the eastern state of Veracruz. The institute is a government agency tasked with controlling and supervising migration in Mexico.

The announcement confirmed earlier reports that such a mass apprehension had occurred.

The detentions come just a day after the United States said it had doubled the number of asylum-seekers it sends back each day to Mexico from El Paso, Texas, according to a Mexican immigration official. The jump was the first major sign of action after a deal between the two countries to avoid punitive U.S. tariffs on Mexican goods.

Luis Carlos Cano, a spokesman for Mexico’s national immigration agency in Ciudad Juarez, said that starting June 13, some 200 asylum-seekers per day were being returned to Mexico, up from 100 previously. The expansion of the “Remain in Mexico” program, reached in a June 7 deal, sends asylum-seekers to await the outcome of their U.S. asylum claims in Mexico.

The program currently operates in Tijuana, Mexicali, and Ciudad Juarez. Close to 12,000 people have been returned to Mexico since it began in January.

Trump commented on June 11 on the recent efforts by Mexico to stem the flow of illegal immigration in a June 11 post on Twitter.

“Sad when you think about it, but Mexico right now is doing more for the United States at the Border than the Democrats in Congress!” he said.

Sad when you think about it, but Mexico right now is doing more for the United States at the Border than the Democrats in Congress! @foxandfriends

U.S. Border Patrol has apprehended almost 600,000 illegal aliens on the southern border this fiscal year, according to the latest Customs and Border Protection (CBP) data.

Meanwhile, a day before the mass detention, the president of the National Migration Institute, Tonatiuh Guillén Lopez, submitted his resignation. A brief statement posted on Twitter by the agency didn’t give a reason for the resignation. He was replaced by Francisco Garduno, who had previously served as the head of Mexico’s prison system.

The June 7 deal between the two countries averted U.S. tariffs, and started the clock on a 45-day period for the Mexican government to make palpable progress in reducing the number of people trying to cross the U.S. border illegally.

Trump previously said he would impose tariffs of at least 5 percent on all Mexican goods sold to the United States if Mexico’s government doesn’t do more. The president, who made reducing illegal immigration one of his signature policy pledges, said that the tariffs would rise to as high as 25 percent if no action was taken.

U.S. border officials reported the apprehension of more than 132,000 illegal immigrants crossing from Mexico into the United States in the month of May alone. That figure marked yet another increase over the previous month, and is the highest monthly level since 2006.

If enforcement measures aren’t successful after 45 days, Mexico has also agreed to consider making itself a “safe third country.” Asylum-seekers who first set foot on Mexican soil would have to apply for refugee status in Mexico instead of in the United States.

Trump also said on June 14 that former Immigration and Customs Enforcement acting Director Thomas Homan will return to his administration to serve as the new “border czar.”