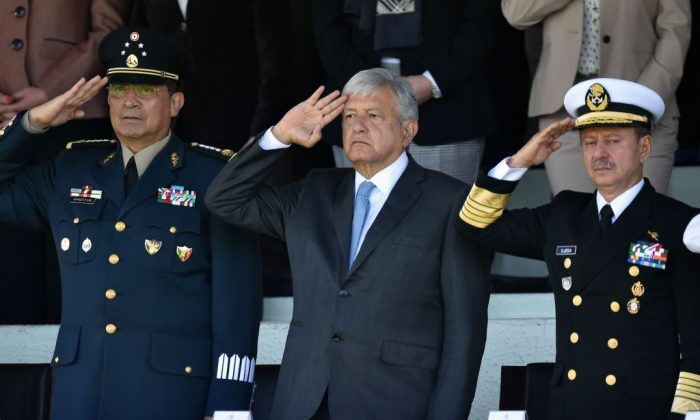 Finance Minister Carlos Urzua presented the budget late on Dec. 15, setting out plans to find more money for both the elderly and unemployed youngsters by slimming down several government ministries and through forecasts of higher tax revenues.

The budget is a major test of President Andres Manuel Lopez Obrador’s economic credibility, which was shaken when he said on Oct. 29 he was scrapping a partly-built $13 billion new Mexico City airport on the basis of a referendum that was widely panned as illegitimate.

Lopez Obrador took office on Dec. 1, and much of the new spending covered pledges made during the election campaign.

Markets might even be somewhat buoyed by the fact the spending plan is more or less what was expected, said Raul Feliz, an economist at the CIDE think tank in Mexico City.

“As a sort of relief that there’s no really crazy stuff in it,” he said.

The plan, which is due to by approved by Congress before the end of the year, forecasts a slight slowdown in economic growth to about 2 percent next year from an estimated 2.3 percent in 2018.

The package also targets a 2019 primary budget surplus—a figure which strips out payments on existing debts—of 1 percent of gross domestic product (GDP). That would be better than the 0.7 percent primary surplus estimated for 2018.

That was an important signal, analysts said.

“The new government’s 2019 budget proposal is fiscally responsible both on the cover and in the details,” Gabriel Casillas, chief economist at bank Banorte, said on Twitter.

Still, markets are likely to monitor the progress of the budget well into next year to see if Urzua can meet his targets.

Investors soured on Lopez Obrador following his announcement cancelling the airport, dumping Mexican bonds, stocks, and the peso. He argued the project was too costly and tainted by corruption, though he has not produced evidence to support this.

Since then, the government has been trying to craft a deal with the holders of bonds that were issued to finance the airport. Although the two sides have been moving closer, the dispute remains a factor of uncertainty, said the CIDE’s Feliz.

Markets are also keeping tabs on the financial health of heavily-indebted state oil firm Petroleos Mexicanos, or Pemex, which Lopez Obrador has pledged to revive. The budget envisions an increase of some 14 percent in funding for the company.

To find extra cash, the plan prescribes substantial budget cuts to a number of ministries and the judiciary, with whom Lopez Obrador has been at odds since the Supreme Court this month froze a law mandating public sector pay reductions.

Urzua told a news conference that only the top layers of government bureaucracy would have their pay cut. Lower level civil servants would get raises, he said.