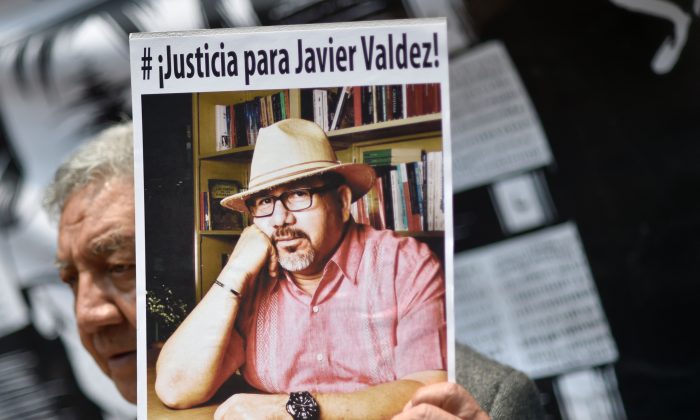 A journalist shows a picture of Mexican journalist Javier Valdez, murdered on the eve, during a protest by journalists in Mexico City on May 16, 2017. Mexico ranks third in the world for the number of journalists killed, after Syria and Afghanistan, according to media rights group Reporters Without Borders (RSF). (PEDRO PARDO/AFP/Getty Images)
Americas

MEXICO CITY–Mexico’s interior minister on Monday said that authorities had arrested the alleged murderer of a renowned journalist in northern Mexico whose death had become emblematic of a spike in violence across the country.

Javier Valdez was assassinated last year in the state of Sinaloa, which has been the scene of violent battles between gangs following the arrest and subsequent extradition early last year to the United States of drug lord Joaquin “El Chapo” Guzman.

Interior Minister Alfonso Navarrete said via Twitter that federal police and prosecutors had arrested Valdez’ alleged murderer and congratulated officials for the joint operation. He did not provide further details.

Sinaloa officials and federal authorities did not immediately respond to requests for further information.

The reporter, known for his signature straw hat, was the founder of Sinaloa’s RioDoce online newspaper.

Shortly before his murder he published a book called “Narcoreporting,” where he wrote about the dangers faced by journalists who insisted on covering the country’s drug war, despite risks of angering gangs and authorities.

Free speech advocates Article 19 said in a report this year that Mexico remains the most dangerous country to practice journalism in Latin America, with murder rates similar to war zones such as Syria.

So far this year three journalists have been killed in Mexico, while there were 12 cases last year. Human rights activists and other journalists have criticized the government for failing to investigate reporter killings.