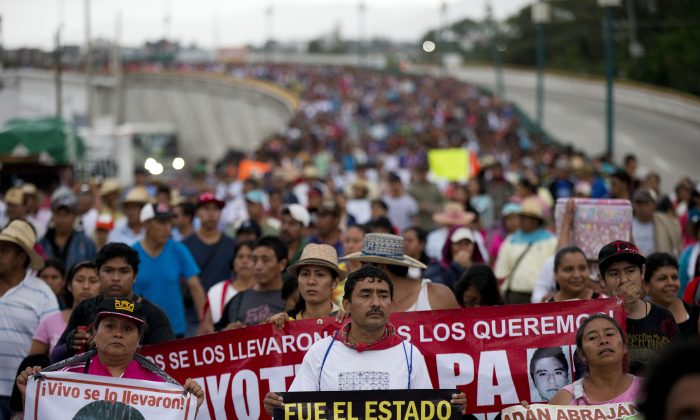 MEXICO CITY—Thousands of people marked the anniversary of the disappearance of 43 students by marching down Mexico City’s premier avenue in an atmosphere of defiant hope Saturday.

Activists said the movement might bring justice for Mexico’s disappeared, though only two of the students’ remains have been identified by DNA analysis of charred bone fragments.

While the march was smaller than past demonstrations, the case has helped publicize the thousands who have gone missing since Mexico’s drug war started in 2006.

Peace and anti-crime activist María Guadalupe Vicencio wore a skirt made of a Mexican flag splattered with fake blood. The names of three disappeared activists from her violence-plagued home state of Tamaulipas were written across her shirt.

Vicencio said the students’ movement “sets an example for all Mexicans to wake up, and not be silent.”

In a meeting with the parents of the 43 missing students earlier this week, President Enrique Peña Nieto promised to create a special prosecutors’ office to investigate all of Mexico’s disappearances.

More than 25,000 people disappeared in Mexico between 2007 and July 31, 2015, according to the government. Unidentified bodies often turn up in clandestine graves of the kind used by drug gangs to dispose of victims. But most people disappear without a trace.

The 43 students from a radical teachers college disappeared on Sept. 26, 2014, after a clash with police in Iguala, a city in the southern state of Guerrero. Six other people were killed at the hands of the police during the disturbances.

According to Mexico’s former attorney general, local police illegally detained the students and then turned them over to the local drug gang Guerreros Unidos, which then allegedly killed them and incinerated their remains.

A group of independent experts assembled by the Inter-American Commission on Human Rights took apart that version earlier this month, saying the funeral pyre simply couldn’t have happened at the small area of a garbage dump where prosecutors said it did.

“For me, the parents of the students have taught us a lesson, about keeping hope for change alive,” said Carlos Martel, a business executive who attended Saturday’s march with his wife.

If they [the government] are betting on us getting tired, they’re wrong.
— Mario Cesar Gonzalez, father of a missing student

The parents of the missing students—many of them barely literate farmers—marched silently at the head of the demonstration. They have refused to accept the government’s version that their sons are dead and have called for a new investigation under international supervision. They stoically decline to concede that the chance their sons will be found grows ever more remote.

And they refuse to give up.

“If they are betting on us getting tired, they’re wrong,” said Mario Cesar Gonzalez, the father of a missing student.

While the government has agreed to re-evaluate the funeral pyre theory, the parents’ movement is at a crossroads. Students and relatives of the missing young men blocked traffic on the main highway from Mexico City to the Pacific coast resort of Acapulco on Saturday, but authorities are increasingly less willing to tolerate such disruptions.

You have to protest. But it’s not enough just to hold marches. … It’s clear you need a political movement.
— Francisco de la Isla, university professor

Many other Mexican social movements based on outrage, like the 2011 crime victims’ caravans, have later lost steam.

“You have to protest,” said university professor Francisco de la Isla, who attended the demonstration with his two young sons. “But it’s not enough just to hold marches. You can hold two or three marches, but with five, people get tired.”