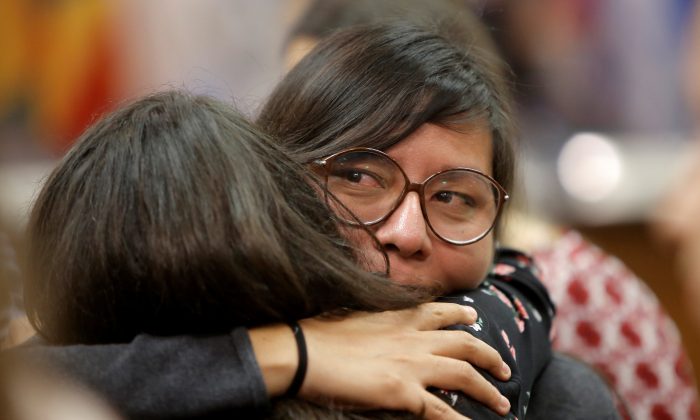 Norma Kimenez (R), a victim of the 2006 land conflict in San Salvador Atenco in Mexico, is embraced afters her hearing was convened by the judges of the Inter-American Court of Human Rights in San Jose, Costa Rica Nov. 16, 2017. (REUTERS/Juan Carlos Ulate)
Americas

SAN JOSE—Women who were sexually tortured by Mexican security forces over a decade ago testified Thursday, Nov.16, before the Inter-American Court of Human Rights, asking for an investigation into the case that happened in the state once run by President Enrique Pena Nieto.

Several of the 11 victims told judges at the Costa-Rica based court about the abuse they suffered after they were detained following a protest in May 2006 at the town of San Salvador de Atenco, about 25 miles northeast of Mexico City. The town is located in the State of Mexico, which rings the capital.

“We’ve come here to speak out. In Mexico, justice has not been done,” said Maria Cristina Sanchez, 50, who detailed how she was beaten, sexually abused and how the case languished in Mexico’s criminal justice system with no resolution for years.

The women, known as the ‘Women of Atenco’, say they were thrown into a police bus, raped and tortured following a two-day protest by a group of flower sellers who had negotiated a labor agreement that allowed them to set up stalls in a nearby downtown area.

The women were initially accused of illegally blocking public access, but later acquitted of the charges.

Before being elected president in 2012, Pena Nieto was governor of the State of Mexico, heading the country’s most populous state from in late 2005 till 2011.

“The Mexican government reiterates the recognition of its international responsibility… and its sincere will to fully repair the human rights violations in this case,” said Uriel Salas, an attorney representing Mexico in the case.

In the years since the abuses were committed, some police were accused of crimes, but there have been no convictions.

“We deserve the recognition that we’re telling the truth, that the chain of command be investigated, not only so that justice is done, but so that these events never happen again,” said Norma Jimenez, 33, at the end of her testimony.

The court is expected to continue hearing testimony through Friday, while a final ruling in the case could take months.