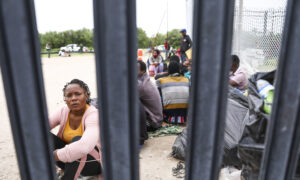 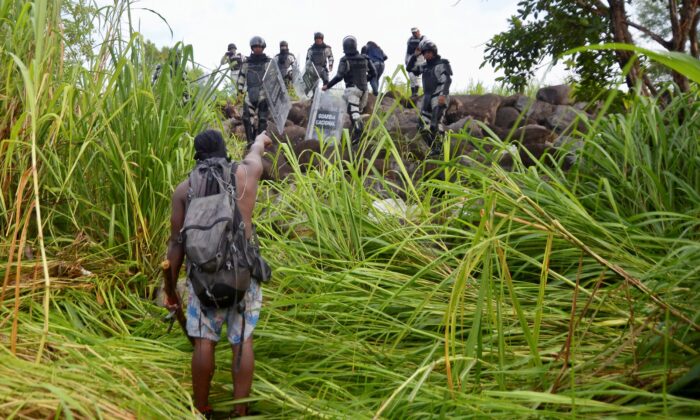 An agent of the National Migration Institute (INM) and National Guard members try to detain an illegal alien during an operation to dissolve a caravan from Central America and the Caribbean as it tries to make its way to the U.S., in Huixtla, Chiapas, Mexico, on Sep. 5, 2021. (Jacob Garcia/Reuters)
US News

HUIXTLA, Mexico—Mexican security and migration officials early on Sunday blocked the passage of a new caravan of illegal aliens, detaining several people, as the government moved to break up the group just a day after it set off from southern Mexico for the United States.

At around 5 a.m. local time, members of Mexico’s National Guard and the National Institute of Migration (INM) began surrounding the illegal immigrants on the edge of the southern town of Huixtla, prompting some of them to flee, a Reuters witness said.

The officials sought to intercept the ones who ran for the banks of the River Huixtla. The caravan was made up largely of Central Americans, Haitians, and some Venezuelans.

The operation to stop the caravan of around 400 people comes a few days after officials dispersed another large group and followed comments by President Andres Manuel Lopez Obrador that he wanted illegal immigrants to stay in southern Mexico.

Lopez Obrador also urged the U.S. government to help the illegal aliens find work, speaking ahead of a high-level meeting of U.S. and Mexican officials on Thursday that is due to address economic matters and also expected to encompass migration.

As had occurred with the previous caravan, some illegal aliens accused Mexican security forces of using excessive force during their intervention, and Maria Martha Ramos, a Honduran woman, said some of the officials threw stones to detain people.

Ramos said she would see if the main body of the illegal aliens regrouped so she could continue her journey north.

The Mexican government recently condemned officials committing acts of violence that were captured on video against the previous group of illegal border-crossers.