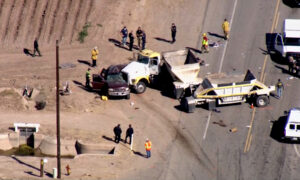 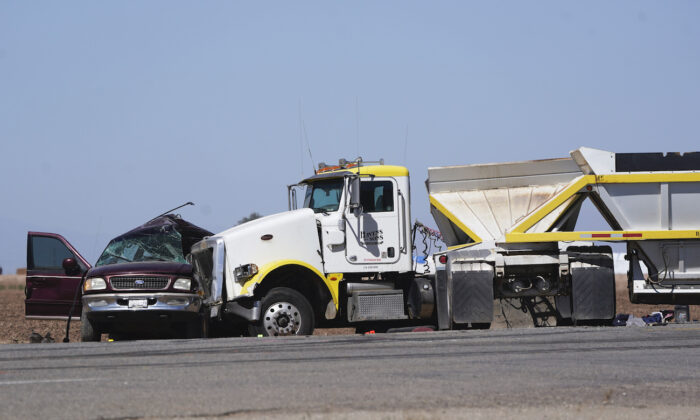 A Mexican man has been charged with human smuggling that led to the deaths of 13 Mexican and Guatemalan people in a car crash near Holtville, California, earlier this month.

Jose Cruz Noguez of Mexicali, Mexico, was charged in federal court on Tuesday with coordinating the smuggling event on March 2 that resulted in a mass casualty crash just miles from the U.S.-Mexico border, killing a total of 13 Mexican and Guatemalan nationals.

Cruz was charged with “Conspiracy to Bring Aliens to the United States Outside a Port of Entry Causing Serious Bodily Injury/Placing a Life in Jeopardy,” and “Bringing in Aliens Without Presentation for Financial Gain,” the Department of Justice announced in a news release.

The crash was between a Ford Expedition SUV and a semi-truck, on Highway 115 at Norrish Road in Holtville—some 115 miles east of San Diego.

A total of 25 people were in the SUV at the time of the crash. Of the 25, a dozen people died at the scene, and another person died on the way to the hospital. A dozen others survived and were sent to other hospitals. Many of the survivors suffered serious injuries, according to the complaint detailing charges against Cruz.

After the March 2 crash, Border Patrol agents and the U.S. Immigration and Customs Enforcement (ICE) opened an investigation into possible human smuggling. Investigators were alerted to Cruz via another suspected smuggler who was arrested for an unrelated smuggling event on March 15.

The unnamed suspected smuggler told law enforcement that he had worked for Cruz in the past and was previously asked by Cruz to be the driver of the Ford Expedition SUV that crashed on March 2. Cruz had offered him $1,000 per passenger but he declined, according to the complaint.

The complaint said that the suspected smuggler on March 26 secretly recorded a conversation with Cruz, in which Cruz confirmed that he was involved in the March 2 event. Cruz also stated that there were 60 customers in two vehicles headed to the border on the day, one of which was the Ford Expedition SUV, and that the driver was going to make $28,000.

The vehicle illegally entered through a border fence hole that Cruz said in the recording that his associates had cut.

Apart from the Ford Expedition SUV, Border Patrol agents found a separate vehicle that illegally went through a border fence hole that day—a GMC Yukon SUV that was burning in Holtville. They also found more than a dozen people running away from the vehicle into the desert. This was the second vehicle that was part of the smuggling event Cruz organized for the day to cross the border to go to a stash house in Holtville.

Cruz was taken into custody late Monday at the Calexico Port of Entry on his way from Mexico to the United States, the Justice Department announced. He made his first appearance in federal court in El Centro on Tuesday before U.S. Magistrate Judge Ruth Bermudez Montenegro, who ordered that Cruz remain in custody. He is next scheduled to appear before court on April 5 at 9 a.m.

“These smuggling networks seek maximum profit by moving as many people as possible across the border with zero regard for their safety and well-being,” Randy Grossman, acting U.S. attorney for the Southern District of California, said in a statement.

“Cramming dozens of people into eight-passenger vehicles and driving recklessly to avoid detection shows an utter disregard for human life. We will find and prosecute smugglers who use these methods and cause such tragic and avoidable deaths.”