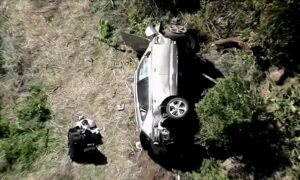 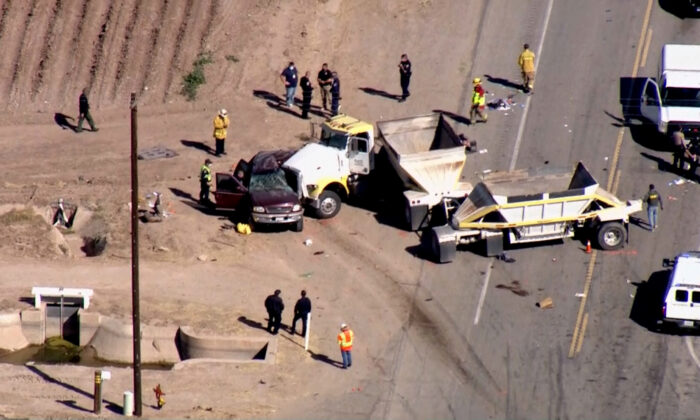 An SUV packed with people and a semitruck slam into each other near the Mexican border, in Imperial County, Calif., on March 2, 2021. (Courtesy of KCAL/KCBS)
US News

At least 13 people have died after a Ford Expedition SUV was involved in a collision with a semi-truck in Imperial County, California, located just miles from the U.S.-Mexico border, officials said.

Twelve people were found dead when first responders reached the highway, which winds through fields in the agricultural southeastern corner of California. Another person died at a hospital, California Highway Patrol Chief Omar Watson said.

A Ford Expedition typically seats eight people legally. The CHP did not immediately know why so many occupants had been crammed into the SUV.

Several survivors were taken to nearby hospitals, including seven who were transported to El Centro Regional Medical Center, where one person died after arrival, officials told ABC News.

The crash occurred in Imperial, which is about 100 miles east of San Diego and 15 miles from the Mexican border.

The truck was traveling north on a two-lane highway, and the SUV was going west along a road where there’s a stop sign before it intersects with the highway, CHP Officer Arturo Platero said. Authorities don’t know how fast either vehicle was going. The speed limit for tractor-trailers on the highway is 55 mph (88.5 kph), according to CHP Officer Jake Sanchez. The other road is also 55 mph for vehicles.

Macario Mora, a spokesman for Customs and Border Protection in Yuma and El Centro, said the Border Patrol was helping other law enforcement with the crash. He said the immigration status of those in the SUV was unknown and being investigated.