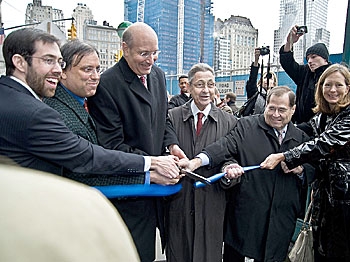 The station was damaged in the terrorist attacks of September 11, 2001. Following the attacks, the R/W station initially reopened on September 15, 2002, before being closed again in August of 2005, for construction of the Dey Street underground pedestrian concourse, a part of the Fulton Street Transit Center being built by MTA Capital Construction.

“Today we celebrate a significant step forward in the rebuilding of Lower Manhattan,” said Walder. “The MTA has played a key role in the revival of downtown and we’re excited to provide customers with an improved station just in time for the holidays. The opening re-establishes a key travel link for Lower Manhattan residents, commuters, shoppers, and tourists.”

The refurbished station includes major upgrades inlcuding: wider stairways that will allow for more people to enter and exit the station; a 150-foot long section of the northbound platform is now wider than before; and the walls have been re-tiled.

The $7.25 million project to rehabilitate and improve the northbound side of the station was funded entirely by the Federal government. The MTA expects to open the southbound platform, which is within the World Trade Center reconstruction footprint, on September 11, 2011.

The Cortlandt Street subway station is served by three subway lines at different times of day: the R train at all times except late nights (midnight to 6:30 a.m.), the W train on weekdays from 6:30 a.m. until about 10 p.m., and the N train during late nights. The station served an average of 15,000 customers per day when it was last open. It was originally opened on Jan. 5, 1918, by the Brooklyn Rapid Transit Company.

Manhattan Borough President Scott M. Stringer said: “Today’s reopening of the uptown platform of the Cortlandt Street subway station is another step toward repairing the damage inflicted by the September 11th terrorist attacks. Projects like the Dey Street passageway, which the Cortlandt Street subway station was closed to make way for, are making Lower Manhattan an even more attractive place to live and work, and will draw families and businesses in the process.”