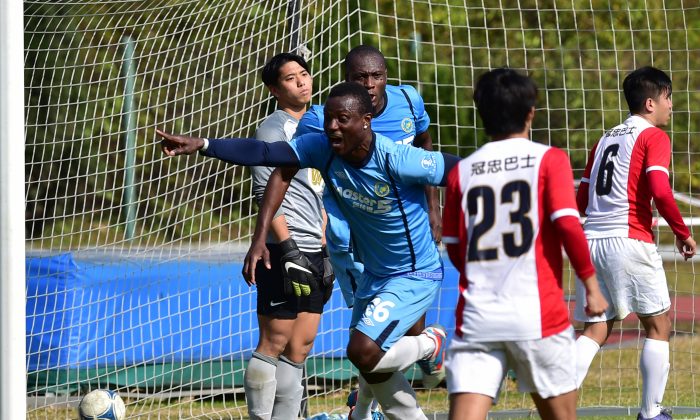 HONG KONG—There was only one fixture played in the HKFA leagues on Sunday Jan 4, that being a game between two of the leading sides in Division one, Metro Gallery Sun Source and Southern, played at 1.30pm at Aberdeen Sports Ground.

After starting brightly and being denied on a couple of occasions by block shots and players firing wide of the target, Metro Gallery Sun Source took the lead in the 9th minute when a long through ball from central defence towards the penalty box, was chased down by centre forward Paul Ngue, who ran into the box and lobbed the ball over the advancing goalkeeper.

After a period of play where both sides cancelled each other out, Metro Gallery Sun Source produced a couple of attacks that were foiled by desperate blocks from the Southern defenders and goalkeeper.

Southern kept their discipline in the second half and made a contest of the game right until the end. Both sides competed and created chances at either end. Southern reduced the deficit in the 62nd minute when their forward, Ko Chun Sean, finished from close range.

Despite both sides creating chances for the remainder of the game neither side could finish any of their moves, and Metro Gallery Sun Source ran out 4-2 winners.

Metro Gallery Sun Source now lead the division one table with 38 points from 14 games, HKFC are in second place with 35 points, Yau Tsim Mong are third on 30 points and Southern are in fourth place with 28 points, but have a game in hand.

Yau Yee League
Sunday Jan 4 saw the completion of the third round of the Yau Yee League Cup where the winners created a near all first division fourth round. The victors, and teams through to the fourth round, were KCC Dragons, Albion, German All Stars, The Store House Hearts, Boca Seniors, USRC, Baker Tilly Spartans and Corinthians. All ties finished in regulation time with the exception of Baker Tilly Spartans and The Store House Hearts who required penalties to qualify.